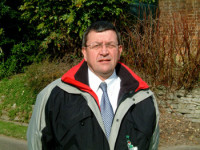 Lloyds of Letchworth have appointed Geoff Roberts as their new Southern Area Manager. Initially a mechanic at Huxleys in 1980, Geoff is best known for his time at Jacobsen where he was Area Sales Manager for the South East and subsequently, UK Sales Manager. In 1996 he became Product Manager for Risboro Turf and has returned to the market to drive forward the new Lloyds 'Back to the Future' initiative. He is responsible for key accounts in the South and South West and is seen as a significant addition to the Lloyds Sales Team for 2006.