0 Lloyds are proud of their past

This year sees Lloyds of Letchworth celebrate their 125 anniversary. It is a history built on quality and customer service. As one of the longest established manufacturers of grass cutting equipment in the UK we are justly proud of our past achievements.

In our product portfolio we have, in the Paladin, the most respected fine turf mowers in the world. Used at many of the leading sports venues the Paladin is, without doubt, the company's jewel in our crown.

Lloyds started business in 1878, based in London, importing the "Pennsylvania" range of mowers from America. The business was growing so fast that in 1913 the company moved to the developing town of Letchworth - the first garden city - which, by coincidence, is celebrating its centenary in 2003. Soon after WWI was to stop production with the factory working round the clock making parts and munitions. After the war the company returned to selling its range of machines. However the lean years of the early 1930's saw prices of the imported machines double and the company started to fully produce all the models in Letchworth.

In 1937 Lloyds was one of the very few exhibitors to attend the first Groundmans Show at the Hurlingham Club in London, who by coincidence have recently taken delivery of a new Lloyds Paladin to add to their range. WWII again put a stop to production, but the company returned to the manufacture of mowers and other machinery post war. Lloyds continued to develop its range of machines with names that have now become synonymous with quality, robustness and reliability. The Paladin, Leda, Pentad and Elite, have all become household names within the turfcare industry.

Many people know Lloyds for robust, reliable, quality and traditional engineered machinery. However I would urge anyone to take a look at our range. Those that think Lloyds products are perhaps old fashioned may be in for a surprise. With the more recent additions of rotary and flail mowers, the Greenline and Holder ranges, and with new models of the Paladin and the Paladin TG launched this year, the Lloyds product range has grown out of all recognition.

The company can now supply Groundsmen and greenkeepers with a complete range of grounds maintenance equipment.

... confident in our future 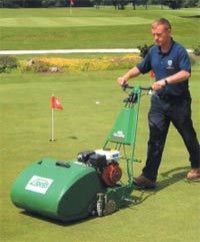 On bowling greens, tennis courts, cricket squares, golf, putting greens etc. Playability is seriously affected by the finish of the turf which therefore demands the mowing excellence provided by Paladin. Now with the introduction of the New Paladin TG with a groomer and the new Paladin Dual to be 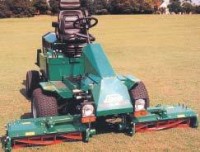 Lloyds Leda mower units are very robust machines designed for prolonged regular use on golf courses, municipal parks or similar landscaped areas. The standard unit being used for a good finish with regular cutting while the giant is used on rougher areas or where less frequent cutting is required.

Leda machines can be mounted on many frame options

Lloyds Pentad Hydraulic 760/5 gang mower is designed to cope with conditions ranging from the rigours of today's less frequent cutting to the better finish requirements of parks and playing fields.

With the introduction of 2 new models the RL1480 - 32" (800mm) 13hp and the RL Samson - 40" (1m) twin deck, both fitted with differential lock and parking brake, Lloyds range of professional rotaries and brushcutters are designed for tough work in tough conditions.

Included in the mower range are side and rear discharge models with cutting widths ranging from 21" to 28". The brushcutters are designed to cope with long grass, scrub and brushwood where access is difficult.

All machines have a high specification and are powered by Briggs & Stratton or Honda engines.

Holder - a perfect solution for every use

Lloyds Hydraulic Mowers are now available mounted on the Holder range of tractors along with Rotary and Flail Mowers, making this combination very versatile. Sweepers and collectors are also available. A 3 gang outfit can be fitted to the Summerpark and Multipark 2.42 whilst the 5 gang outfit is mounted on the 3.42. With the addition of other equipment the Lloyds / Holder machines are specialists in practical multifunctional needs and effective solutions for local authorities, contractors, golf courses and estates.

Compare our range with our competitors and you will soon discover what sets the Lloyds Holder machines apart. The range of options are endless so please do not hesitate to ask if you have special requirements. The GreenLine range exclusive to Lloyds

The GreenLine Combi-Trailer is a new concept in the maintenance and care of the environment allowing rational work routine and control of expenditure it is of immense value to following: for at very short period of the year.

This is why the GreenLine system has been developed. The green sector has a tool carrying system, which does not require special equipment from the tractor and which can be used together with existing tractors regardless of whether they are agricultural or compact types.

Clive started work at Lloyds in 1975 on the engine department as a fitter. In 1978 he was promoted to supervisor showing a natural ability he was very soon familiar with the design and construction of all Lloyds range. In 1988 he took up the role of Production Manager, which followed the move to Production Director and started to head the company and in 1997 took over the role of Managing Director and also covered the role of Sales Director. Clive's early knowledge of engineering ensures a hands on approach to fulfilling our customers needs.

Ian started in the works office of Lloyds as the company's buyer and now has 38 years service. After a few years his role soon moved to production planning and he started to become involved in the drawing and design of components. Ian also moved to the board in the mid 80's, becoming Director and today Ian covers the Production Director's role carrying out the company's purchasing requirements with the manufacture & design of machines through to the finished product. In his spare time Ian enjoys classical music.

Glenn is the longest serving member of the Lloyds team, joining in 1961. Glenn started in the sales office as a junior sales clerk before moving to internal sales. He later became warehouse manager taking over the responsibility of stocking parts and distribution of Lloyds products. Glenn moved to the board in the mid 80's eventually becoming chairman, a position he fills today along with the role of Customer Services Director. In his spare time Glenn is a keen Country Music collector and enjoys time walking with his dog Anna.

Ray joined Lloyds in 1996 as the Southern Area salesman, having previously worked in sales of other groundcare equipment. Ray soon settled into the role, moving to the position of Sales Manager in 1997. Ray has a keen interest in football, having played at first division level in the early 60's as a goal keeper, playing for Crystal Palace, Portsmouth and West Bromwich Albion. With 7 daughters in the family Ray says "what spare time?"

Alastair is the newest member of the sales team who joined us in early 2003, however he has already become a popular member of the team. Alastair was previously working with Scottish Borders Council before taking a year out in Australia. With his father and brother both working within the industry he has a good background in the supply and maintenance of turf care products. Alastair is a keen rugby player in his spare time.

Alan joined Lloyds working in the warehouse but after a few years moved on to pastures new. However, he soon returned to Lloyds running the paint shop, a role he held for many years. In the 80's he moved to a sales support role delivering and installing Lloyds equipment later moving to the role of sales / demonstrator. In his spare time Alan is keen on motorbikes, rebuilding many as well as attending race meetings.

Michael originally joined Lloyds working as a machinist manufacturing components for machines. He later moved up to run the tool-room working on the design & manufacturing of jigs and components. Michael left Lloyds for a few years to work in the print industry, but we were pleased when Michael agreed to join us again last year to fulfil the role of Technical Engineer working in design and development and also covering a sales support role.

Pam has worked for Lloyds for 13 years, joining in 1990 Pam covered a role of typing and administration. Taking over the reception / parts sales in the early 90's as well as supporting the sales team internally. Many people will encounter Pam and know her voice with a lively sense of humour. Pam's relationship with our customers forms an important link.

For further details on any of the Lloyds products, or to request a demonstration please contact us on Tel: 01462 683031 or Email: sales@lloydsandco.com