by Alastair Rowell
in Conservation & Ecology, Machinery & Mechanics, and Local Authority
on 09 Sep 2021

All over the country, councils, local authorities and contractors are letting well-manicured grass grow out to create wildflower areas. There have been many reasons for this: a growing focus on climate emergency declarations, establishment of council carbon management programmes, the widespread decline in pollinating insects in the UK and growing public acceptance for alternatives to traditional council green space management. 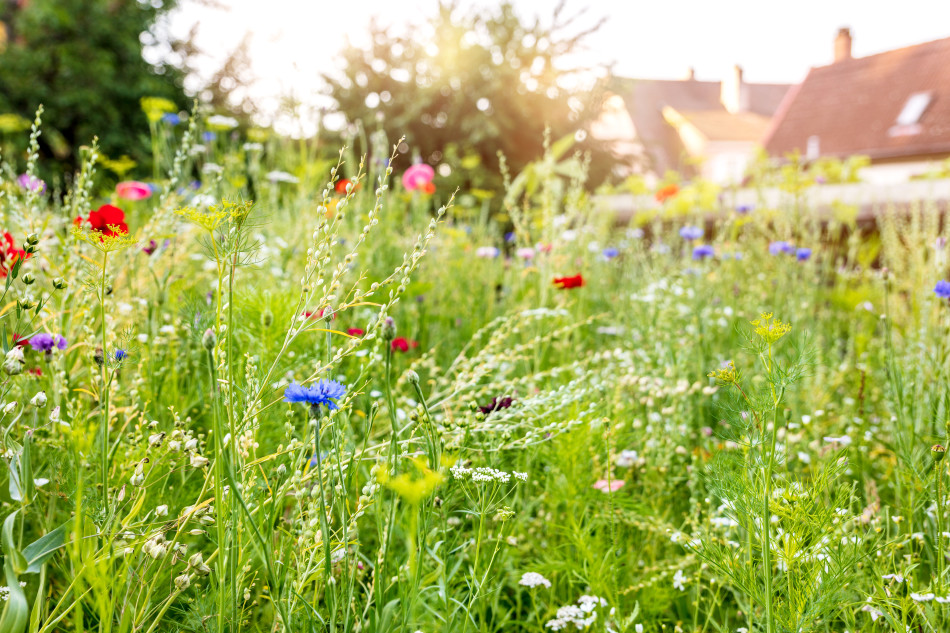 One of the few benefits of the spring lockdown last year was that wildflowers were able to bloom on roadsides as the pandemic forced maintenance teams to stay at home. An explosion of colour followed across the UK, and the resulting showcase of colour provided an unexpected joy to many members of the public and made them realise they could share their urban space with wildlife.

Looking after urban verges and green spaces can be challenging. Implementing changes to 'rewild' areas can cause complaints that the grass is scruffy and unkempt, resulting in neighbourhoods looking abandoned and concerns about increased littering. The good news is that you can encourage flower-rich verges and ensure visible management.

In this case, rewilding is the creation of wildflower meadows using low fertility soils, re-establishing natural processes to repair ecosystems and boosting biodiversity. The UK has the space to make a difference. In a research paper**, it was reported that verges account for about 1,000 sq miles (2,579 sq km) of the UK's land which has, up until recently, been maintained as short, frequently mown grassland.

This is an overlooked but vital habitat which can be home to more than 700 species of wildflowers. As 97 percent of Britain's traditional meadows have vanished since the 1930s***, these areas of land are increasingly important for flowers and other wildlife if managed correctly. 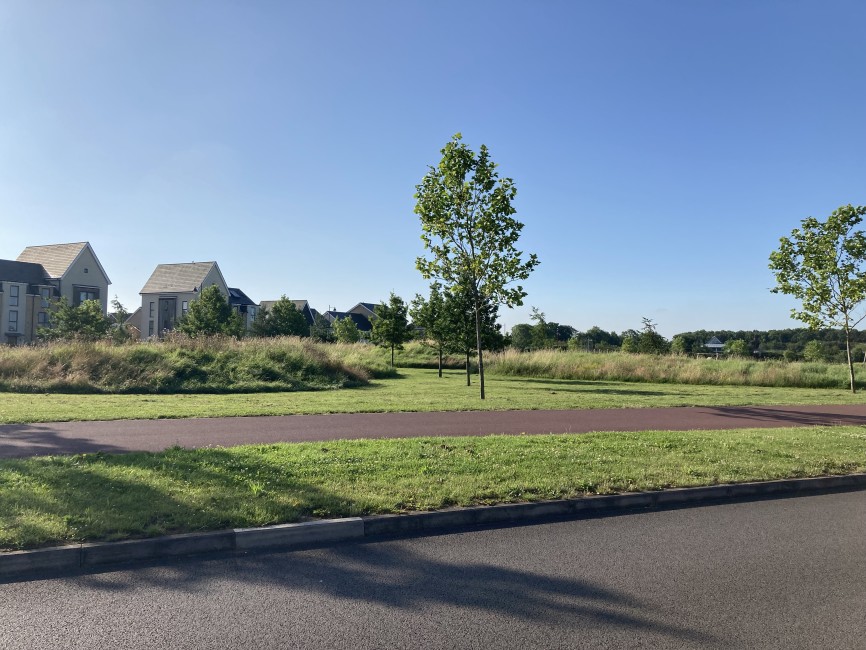 Councils, local authorities and contractors have the power to support billions of flowers nationwide with a mowing regime that helps wildflowers thrive. Changing the way these areas are maintained by reducing mowing provides more flowers for pollinators, allows plants to set seed and creates better habitats for wildlife. And the good news is verges don't have to be long to be wildlife-friendly. Species such as clovers and trefoils, among many, grow quite happily at ankle height and support a huge array of pollinators.

Rewilding has the added benefits of cutting carbon emissions, saving money and protecting nature, as well as to eventually looking incredibly pretty.

Roadside verges are increasingly important 'wildlife corridors' for plants, flowers and invertebrates across an increasingly fragmented countryside. This type of land, defined as the strip of land between the roadside and the fence, presents significant opportunities to improve verges as multifunctional green spaces in urban areas and densely populated regions where land scarcity is an issue.

The Local Government Association says councils must keep verges short to ensure motorists have a good line of sight and allow pedestrians to walk safely alongside busy roads. Other reasons are to prevent the spread of weeds and invasive species into private gardens and pressure from local communities to maintain a certain aesthetic appearance.

Cutting narrow strips around the wilder verges to frame them is a simple but effective way to give the perception of tidiness and help combat the view that wildflower-rich verges are untidy and neglected, potentially offsetting potential negative feedback. 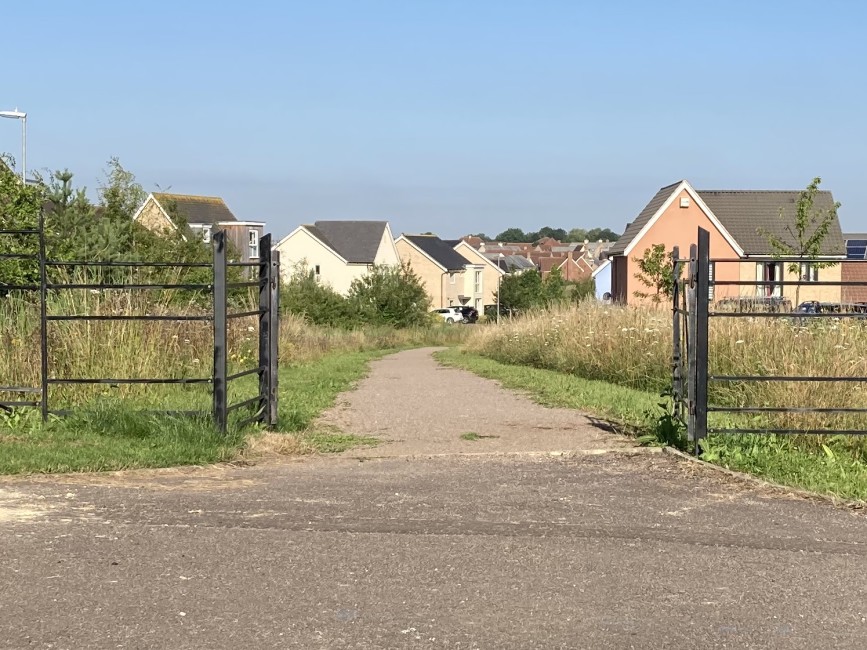 Framing verges involves cutting a one-mower-width, or at most 1.4m, along the front edge of the verge to frame the longer grass and wildflower area behind it. This lets people know that the area is purposely being left and that it hasn't just been neglected. This approach has two other important benefits:

Keeping roads safe: The area of shorter grass at the front of the verge can preserve good visibility and ensure safety at junctions, as well as keeping footpaths through green spaces open and accessible.

Structural diversity: The two different heights of vegetation - short in the front and long at the back - are great not only for plant diversity (some species are naturally low growing, others tall) but supports lots of insect life too.

Framing verges requires regular maintenance of between two to four weeks. Traditionally, councils, local authorities and contractors would use triple cylinder mowers or rotary mowers for keeping the grass shorter as they provide the best cut and after-cut appearance, but as they can only cope with grass that is cut quite frequently, they're not suitable to this new approach.

This change in requirements makes the job of the mower three or four times as hard because they're not cutting as regularly. The upshot is a flail mower is the better option for these areas because they can cope with longer grass, less frequent cuts and are cheaper to maintain. 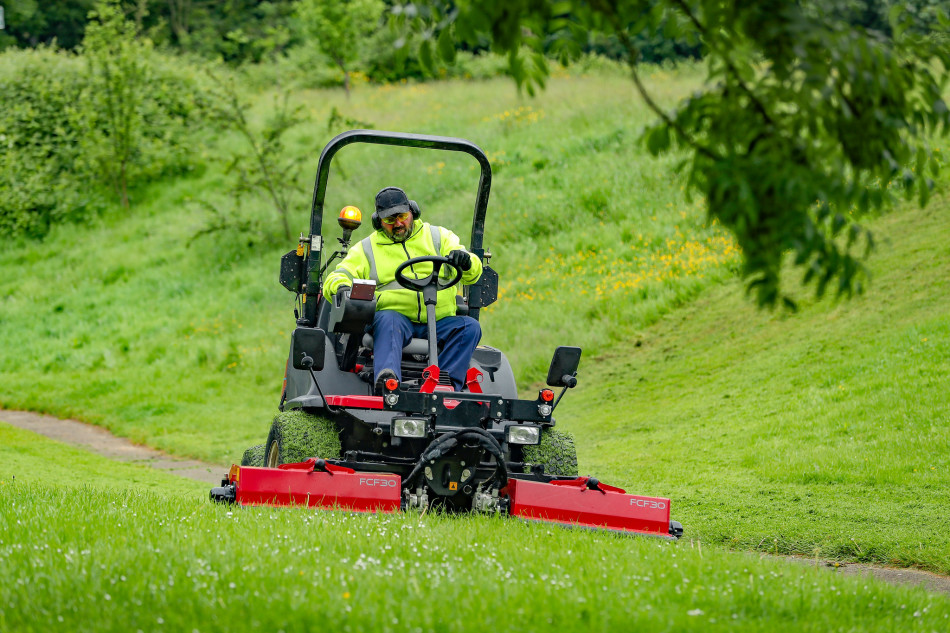 A triple flail mower, such as the Toro LT-F3000, mimics the size, cutting width and manoeuvrability of a traditional triple cylinder mower. The flail cutting heads are able to cut long and short grass, wet or dry, and leave a much better after-cut appearance than a rotary mower.

Customers can be a little nervous of investing in the unknown such as a flail instead of a traditional cylinder or rotary mower, which goes against a purchasing decision they've been making for years. But the technology around today and tough field testing means perceptions are starting to change and councils, local authorities and contractors are seeing this as a viable solution for solving a lot of the mowing issues these budget constraints and less frequent mowing cycles create.

The Toro LT-F3000 has the added benefit of an interchangeable cylinder attachment which gives versatility and the capability for the front-facing triple mower to cut two ways if and when needed: tougher cutting with the flail or finer with the cylinder. Very useful for those maintaining roadside verges as well as local parks or playing fields.

Toro understands that the groundscare sector has many different areas and challenging environments to cut, from the widest open spaces to the narrowest verges, and roadsides with longer grass to recreational fields with shorter. Having a mower that can, with the easy attachment of a cylinder unit, tackle the longer grass and then multi-task by extending its use to leaving a premium finish on playing fields and sports grounds is a really cost-effective solution.

Plus, it can also easily turn its hand to annual roadside verge grass cutting programmes ensuring all visibility areas, sight lines and junctions are tackled as well as the bank and cutting to clear long grass and maximise control of vegetation height.

The vast majority of amenity grassland and urban verges may have little biodiversity value, but they have significant potential. The key to realising this lies in 'cut and collect' whereby highways authorities remove the grass cuttings from the site. The most effective way to encourage wildflowers in grass is to reduce soil fertility. Collecting the thatch of decaying grass removes nutrients and reduces the fertility of the soil and, as wildflowers thrive in poor soils, means that over time more wildflowers will thrive and less vigorous grass will dominate.

If there is a significant reduction in ground nutrients over successive seasons, the result is shorter grass and greater species diversity. Over time, it should be possible to reduce the cutting regime from 10 cuts annually to two or three cut-and-collect mowings each season, and the grass remains relatively short, because growth is suppressed. As a result, there will be more wildflowers.

Where wildflowers are well-established, one annual cut in the autumn when seeds have been set will be sufficient. For this type of work, cutting down wildflowers in a single pass, then something like a SICMA flail mower attachment is ideal.

Something the recent pandemic and series of lockdowns has given the nation is an appreciation for the outdoors, the simple pleasures in a daily walk. Alongside the array of other benefits rewilding brings, it showed so many people that an eruption of wildflower colour belongs in cities just as much as the countryside.

Framing wild verges is a cost-effective, practical solution in the journey to road verges being designed and managed to support an array of wildlife - just don't forget to communicate any changes to verge management. Flower-rich verges are increasingly popular with local communities and are a great way of encouraging wildlife into the heart of the built environment; and verge signage makes clear that wilder verges are intentional and can engage local communities, helping to address negative perceptions of wilder areas.

Reesink is available to help you decide which machines will work best for your specific requirements and budget. There are always flexible finance deals available with deferred start dates, subsidised rates or that can be aligned to peak income months to help manage cashflow, too. It only takes a conversation. Make contact with Reesink Turfcare by phone on 01480 226800 or online at reesinkturfcare.co.uk