0 Local groundsmen battle against the elements to fulfill sporting fixtures 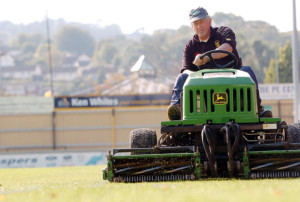 Yet, whilst you huddle around the fire with a mug of warm cocoa, spare a thought for those who work tirelessly in order to guarantee the sporting calendar is not affected too much by the weather.

Often it can be a thankless task, battling against the weather for hours on end only to see an 11th-hour downpour render all of your work useless, forcing the referee to call off a fixture.

Clive Pring, estates manager for Exeter City, says the key to getting a game on is to plan ahead as much as possible.

Pring explained: "It's very much about finding what weather's coming in order to find a window to do things.

"Sometimes we do some of the jobs when we shouldn't do - in the ideal world, you'll have a field that no one's using and you'll be able to do things exactly when they should be but we have to manage around the players.

"It's when the weather chucks something at you that you're not expecting. A few years ago it was those monsoon-style showers.

"We also have frost covers at St James's Park, so if we're expecting really cold weather before a game, then we'll lay sheets across the pitch. The sheets will protect it down to about -5C but we had an experience one year of the temperature going down to -15C and there wasn't a lot we could do about that."

For Pring, a challenge also comes in having to manage both the St James's Park pitch and the pitches at the club's Cat & Fiddle training ground.

He revealed: "If you have a downpour of rain, then the St James's Park pitch is quick to drain, which differs from the pitches at the Cat & Fiddle, which are on an old clay field.

"The challenge with the Cat & Fiddle is also through the amount of use it gets, as you have the first team and the under-18s there. That means we've got to balance between going out there and doing something when we shouldn't and knowing something needs to be done as the teams don't want to turn up and find a pitch that's not ready to train on."

Yet the lower down the football pyramid you go, the more likely it is that a game will be postponed.

"What controls this pitch more than anything is the rain on Exmoor," Curtis said. "If they get a lot of rain on the moors, then it comes down to Ladysmead and lifts the water table up - if the Exe is running fast, though, then that will take a lot of water away from the pitch.

"If there's a lot of rain and a lot of water on the moors, then the pitch doesn't drain very well but we've done things over the years, like fully drain it and put sand on it, which can help with the drainage.

"We've got a major problem with frost, as the sun can't reach an area behind the clubhouse. If it's a real hard frost, then that never thaws out, and there's no point in covering it, as we've tried that in the past but it gets underneath the covers. We haven't got the facilities to cover the whole pitch.

"You keep your eye on the weather forecast and get things done quickly - sometimes you can't do things and then you're just in the lap of the gods.

"I'm retired now, so it's slightly different as I have bigger windows to do things in."

At Devon & Exeter League side Heavitree United, Mike Bond, a landscape gardener by trade who helps with their Wingfield Park pitch, says that, whilst they are exposed to the elements, the players' keenness to play can often outweigh any problems to the pitch.

"There's not a great deal you can do if it's too wet," he admitted. "The games usually go ahead, as players want to play, so it's got to be quite adverse weather conditions to not play.

"There's not a lot a club can do with frost unless you've got the money to pay for special equipment, which clubs at this level don't have. We're at the mercy of the elements, usually."

With the weather getting colder and wetter, groundsmen will be crossing their fingers that their plans to get games on will not be too badly affected.

For the original article, visit www.exeterexpressandecho.co.uk.