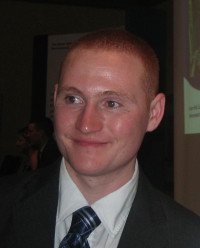 Apprentice greenkeeper Daniel McGarrell from Biggar in Lanarkshire, has been named Horticulture Learner of the Year and Scottish Enterprise Learner of the Year, by Lantra, the landbased and environmental sector skills council for Scotland. The 23 year old, who works with South Lanarkshire Council, received two trophies and cheques for £450 at a ceremony in the Dunblane Hydro Hotel.

Daniel was nominated for the awards by Oatridge College in West Lothian where Graeme Bryce, one of his tutors, said that the success represents the most remarkable turn around I have ever seen.

School, Daniel admits, Was not one of my strong points. He could not wait to get out, but when he did he drifted from job to job, including 12 hour shifts in a horrible fish processing factory.

Even when he began work as a greenkeeper at his local Hollandbush golf course and was persuaded to begin a Modern Apprenticeship, studying at Oatridge College was simply an extension of boring days trapped behind a desk at school.

Then came a life-changing experience. On a visit to the beautiful Loch Lomond Golf Course with a group of Oatridge students he walked the immaculate fairways and greens with course superintendent David Cole and suddenly realised what could be achieved by determination, skills and hard work. It opened my eyes to a lot of things and after that, it was just easier to get my head down and get on with the work.

I love working outdoors, the whole environment. Its the idea that you are working in a beautiful place every day. After all my other jobs it as been a real Godsend and it as given me a new lease of life.

In the years which have followed he has excelled in his College studies and at work has been put in charge of the training of two younger apprentices. His training officer, Iain Currie believes he is well capable of becoming a chargehand greenkeeper or head greenkeeper in the public or private sector. Graeme Bryce says: Since his first visit to Loch Lomond, Daniel is quite simply a different person.

Daniel hopes to continue his formal education but meantime he has other things on his mind: He is due to become a father in the next few months.
He jokes: That's where the Lantra prize money will come in handy. My partner is already planning to spend it on things for the baby!

Previously Daniel reached the finals of the National Association of Public Sector Excellence Awards and was runner-up in the South Lanarkshire Apprentice of the Year Awards last year. He said: I can hardly take in what has happened. It was a really fantastic feeling when I heard my name read out, not just once, but twice!

The top prize in the Scottish Lantra Awards also went to an Oatridge student. 22 year old agricultural engineering apprentice Calum MacLeod from Saline in Fife was named Landbased Learner of the Year for 2007, making it four-in-a-row for students at the for the College.

Calum, who works for George Sellar and Son, the agricultural machinery distributors at Newbridge in Edinburgh and studies for his Modern Apprenticeship at Oatridge, also won further prize as Agriculture Learner of Year and Modern Apprentice of the Year. He picked up three trophies and £850 in prize money at a ceremony at the Dunblane Hydro Hotel.

David James, the Principal of Oatridge College, said: I could not be more proud of our students. We are one of the smallest colleges in Scotland, yet had two of the 11 finalists in the Lantra Awards. The competition gets tougher ever year and on this occasion we were up against almost 70 nominations from colleges all over Scotland.