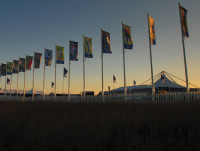 The sheer logistics of hosting a major golfing event are immense. It's not just a case of providing a well-manicured golf course

The London Golf Club was awarded the European Open as late as February of this year, which left just four months to get the course and infrastructure into peak tournament condition. Laurence Gales MSc joined the volunteers who helped out during the event

The European Open is one of the most prestigious tournaments on the European Tour. It is one of two tournaments, along with the Scottish Open at Loch Lomond, which leads up to the Open Championship. Therefore, it attracts the top European Tour players, and a few from 'across the pond', aiming to find peak form before the third major of the year.

For the past thirteen years, the European Open has been played at the K Club in Ireland but returned to the UK this year when The London Golf Club's Heritage Course played host.

The London Golf Club is an exclusive membership golf club offering two 18-hole courses. The Heritage is a Jack Nicklaus Signature Course which is reserved only for members and their guests. The International, which is open to visitors, corporate and society days, was designed by Ron Kirby, the senior course designer for Golden Bear Design. Both courses spread over an area of 750 acres.

One of just a few Nicklaus Signature Courses in the world, The Heritage has some challenging carries, tricky greens, water hazards and over one hundred and forty bunkers in characteristic Golden Bear fashion. Its exposed position, at the highest point on Kent's North Downs near Brands Hatch, further ensures that it is a very tough course, especially if the wind gets up! At 7,257 yards long off the back tees it is, therefore, ideally suited to tournament play.

The International and Heritage courses were opened in 1993 and 1994 respectively. A reputed investment of 44 million pounds was originally ploughed into their development, with considerable further outlay by the present owners, The Bendinat Group, which develops luxury properties on the Spanish island of Mallorca and owns the stunning Real Golf de Bendinat.

For the past three years, The Bendinat Group has been title sponsor of the London Seniors Masters, which has been won twice by Scotland's Sam Torrance (2005 and 2007) and also by Italy's Giuseppe Cali in 2006.

The success of these events, under the helm of Courses Manager Peter Todd, was a significant reason why the club was awarded the European Open this year. What is remarkable is that the announcement was not made until February of this year, leaving just four months for Peter, and his Assistant Courses Manager Glenn Kirby, to get the course into peak condition.

Once it was public knowledge, it was a case of 'all hands on deck'. The sheer logistics of hosting a major golfing event are immense. It's not just a case of providing a well-manicured golf course - which The London Golf Club endeavours to do for its members and guests all year around. Narrowing of fairways, growing up the rough and extending the 18th hole did not pose as significant alterations. For the greenkeeping staff, the increased workload came with accommodating the infrastructure requirements including traffic routing, parking, television coverage, tented villages, spectator facilities and commercial hospitality.

Peter, who has been at The London Golf Club for sixteen years, takes on much of this additional work and liaises with the many agencies involved, leaving Glenn to manage the golf course. He has a team of twenty-five full time staff who look after both courses.

Glenn has been at The London Golf Club for five years and has had plenty of tournament experience having looked after the senior tour events at the club coupled with work experience in America.

To get the course into tournament condition, the frequency of maintenance regimes was increased. Much of the work was geared around modifying the fairway outlines and intensively topdressing the greens to get the fastest and smoothest possible ball speeds. Bunkers on the 4th and 10th had already been remodelled and a number of others refurbished with new drainage and sand.

Peter has invested heavily in machinery and, over the years, has built up a large inventory of equipment. Nearly all of the mowing fleet is from Toro with Greensmaster 1000 pedestrians their choice of greens mower. The machinery is on a five-year rolling replacement programme.

As soon as th

e machinery comes back into the yard, after completing its task, it is washed down, greased and refuelled for the next day. All machines are maintained in-house and cylinders are kept sharp using Bernhard grinders.

Peter and Glenn worked closely with European Tour agronomist consultants; Richard Stilwell in the early stages and latterly with Graeme MacNiven, who advises on the final details of green speeds, hole and tee positions.

Three weeks prior to the event, Glenn took on extra labour in the form of specialist contractors, Paul Sheather MD of Coursehands, Richard Gresswell and Andy Davies of AJD Landscape to assist with preparation.

A few months prior to the event, Pitchcare's Laurence Gale answered an advert in Greenkeeper International asking for volunteers to assist with the running of the course during the tournament. In return for free labour, all volunteers received accommodation and food but, more importantly, the opportunity to work behind the scenes at a major televised golfing event.

The weather during the European Open was good, with the exception of the final day when it rained quite heavily.

As the saying goes, it's the early bird that catches the worm. Never a truer word spoken! Work began in earnest at 4.30am on Tuesday with greenkeepers preparing the course for the first of the official practice rounds, tee off being 7.30am. Therefore, it was imperative that all the work was completed before the golfers appeared.

Keeping an eye on the condition of the greens was a high priority, with them being monitored at all hours of the day. It was important to ensure there was consistency throughout especially with respect to speed; the PGA Tour's brief being to produce a course that was challenging but fair.

The Heritage has an open, hilltop position and is often subjected to gusting winds that, during sunny periods, can quickly dry out the course.

vapotranspiration rates can be quite high so Andy Pearson, the club's irrigation technician, along with Peter and Glenn, kept a watchful eye on the weather

situation and condition of the playing surfaces, instigating hand watering when required.

Between 10-15 soil core samples were taken to ascertain the moisture content of the greens and surrounds so that an effective watering regime could be carried out as required. All greens were stimp-metered every morning by Glenn averaging between 10.5-11 feet.

Key staff members were issued with hand held radios facilitating contact at all times. Peter and Glenn were always communicating with the European Tour and relayed any relevant information to the crew. Some matters which arose during the competition and needed addressing to meet specific Tour requirements were bunker raking, watering, the cutting of greens and their speeds.

Each day's work was split into two shifts - before and after play. Staff arriving for the 4.30am start would work straight through until eve

ry job was completed, finishing around 10.00am. All machinery would then be washed down, checked over, set up and refuelled ready for the night shift.

A hearty English breakfast would then be served to boost energy levels.

The crew was then divided into two teams to work a split shift between 11.00am and 4.30pm covering any issues during play. Many greenkeepers not on the first shift were able to get their heads down for a well earned rest.

The tournament spanned six days. An official practice day on Tuesday, early practice and Pro Am on Wednesday, and Thursday to Sunday for the tournament proper.

A typical day for the staff and volunteers would be:

The volunteers had come from all over the UK. For some it was their very first tournament experience. For others, like Neil Smith, Chris Bromley and Will Bowden they had plenty of tour knowledge with several tournaments under their belt. Will Bowden had previously worked at The London Golf Club and had just returned from working in New Zealand to take up a teaching post at Cannington College. 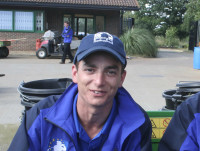 I saw the advertisement for volunteers for the European Open and thought I would give it a go. I was not disappointed. The Heritage is a fantastic course and it was very enjoyable to work there. Everything was planned to perfection. It was good to help and observe them prepare the course to absolute perfection. The greenkeepers compound was just as good as any I have seen in America. Peter Todd, Glen Kirby and their staff worked well and I think everyone was ready for a good sleep b

y the end of it!! It was a thoroughly enjoyable experience.

"The chance to work at a top golfing event and gain some valuable experience has been well worth all the hard work and long days. The camaraderie between the staff and the volunteers has been fantastic. The chance to learn from top greenkeepers and experience at first hand the level of intensity required to produce top quality playing surfaces has been invaluable" said Ben.

I volunteered for the European Open because I wanted the experience of working with a group of people that I did not know and produceing a course to the highest standard. I have learned so much. My bunker raking technique especially! I also got an inside look to how much effort is required to make an event like this work. Every time I watch a sporting event now, whether it be golf, football, tennis, cricket or rugby. I wil have an idea of the time spent making it that good for the short time that it will be used.

Thanks to Peter a

nd Glenn I can take the experience back to Orpington and try to apply it there and see what difference it makes.

And I would have to agree. The four days I spent working alongside so many dedicated and committed Greenkeepers was a fantastic experience and one I will not forget for a long time. The sheer amount of effort and organisation to bring this successful tournament to fruition was astounding. Peter and Glenn must be congratulated for their work ethic and professionalism in delivering what was deemed a successful European Open at The London Golf Club.

After the tournament Peter and Glenn debriefed the team and thanked them all for their hard work throughout the event. All the staff enjoyed some post tournament celebrations including a team photograph with the winner, Englishman Ross Fisher, and celebrities including former boxer and The London Golf Club Member Sir Henry Cooper.