by External source
in Golf, People, and Industry News
on 28 Aug 2017 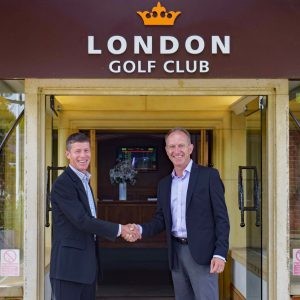 London Golf Club has announced that 'Master Greenkeeper' Lee Sayers, course manager at Mid Kent Golf Club, is to join the club as the new golf courses and estate manager.

Sayers will be coming in at an exciting time for the club with progressive developments planned for the championship courses over the coming years.

"Lee comes to us with a quarter of a century of experience in greenkeeping, which include working at prestigious courses around the world," commented Stephen Follett, chief executive of London Golf Club (pictured right, with Lee). "With his expertise and know-how, we're confident that Lee will be a key player in the course developments going forward."

This won't be Sayers' first experience of London Golf Club. Having worked at the club previously, first as assistant course manager in 1994, then later as head greenkeeper, he left in 2003 to gain experience at Mid Kent Golf Club.

"It's an honour to be coming back to London Golf Club as the golf courses and estate manager," commented Sayers. "The club holds a well-earned reputation as one of the best golf venues in the UK; I look forward to working with the team and continuing the great work they and Peter Todd have been doing on site."

The courses at London Golf Club that Sayers will be working on will be The Heritage, a classic Jack Nicklaus course that is both challenging and memorable, and The International which is one of the finest downland courses in England.

Both courses have a rich tournament pedigree and have played host to the European Open in 2008 and 2009, the Volvo World Match Play Championship in 2014, and the 2016 Brabazon Trophy.