One of London's most important charities the London Playing Fields Foundation celebrated its 125th anniversary yesterday at City Hall in the presence of Kate Hoey MP, President of the LPFF and Helen Grant MP, Minister for Sport. 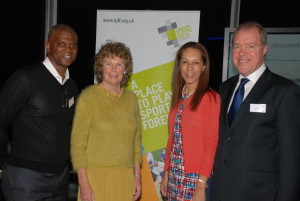 They were joined by a range of sporting organisations including the FA, the Premier League, English Cricket Board (ECB), Saracens and many grass roots clubs and volunteers. One of the special guests was former Arsenal legend Paul Davis who explained to the large gathering how his football career would never had taken off had it not been for a number of playing fields in south London where is was able to hone his skills and develop his talent.

Founded by Victorian philanthropists in 1890 who were concerned about the loss of green space in London, the charity's mission is to provide a place to play sport forever by protecting and providing accessible, affordable and attractive playing fields for local communities. Despite London having 13% of the country's population but only 8% of its playing fields, the LPFF has remained the first port of call on playing field matters and is one of the main reasons why London is still one of the greenest capital cities in the world.

Helen Grant MP, Minster for Sport said; "It was a pleasure to attend the 125th anniversary of the London Playing Fields Foundation. The charity does fantastic work in encouraging participation in sport and outdoor recreation as well as playing a vital role in ensuring that playing fields stay protected. I wish all connected with the charity the very best of luck for the future."

President of the LPFF and Mayor's Commissioner for Sport Kate Hoey said;

"London Playing Fields Foundation fulfils an important strategic role in London by protecting playing fields under threat and by helping to restore them to full use which is ultimately the best form of protection. In this 125th year we want to evoke the same philanthropic zeal of our founders and ensure that future generations have a place to play sport."

"Playing fields are much more than expanses of open space, they are places where lives can be improved. With one in six deaths caused by inactivity we are not saying that we are providing a cure for cancer or heart disease but the full use of playing fields and the activity they create can help prevent them."