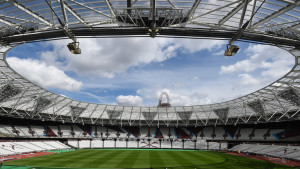 The London Stadium is moving closer to hosting two matches over a weekend in the 2019 World Cup, creating what the England and Wales Cricket Board hopes will be a record-breaking festival of cricket.

The organisers of the World Cup would like the London Stadium to host one day-night match on a Friday, and then a day game on a Sunday. Should the plans be ratified, England and India seem certain to play a game each. The probable fixtures would be England playing Australia, perhaps on the Friday under floodlights, and India playing Pakistan.

Given the capacity for cricket is believed to be 60,000, the crowd for the India-Pakistan match would be the highest for a game between the two countries outside the subcontinent.

Playing two matches at the London Stadium over a weekend would reduce operating costs and increase the visibility of the games.

The World Cup organising committee will meet to discuss the use of the stadium on 11 May and hopes to confirm its decision in mid-July, once it has seen how quickly the venue adapts to athletics after its first season being used by West Ham. The window in which the venue could host cricket is believed to be only a week.

While it had been thought the London Stadium could host Essex T20 matches next summer, this now appears unlikely. The World Cup matches would be the ground's first cricket games.

The organising committee has found the size of the boundary complies with the International Cricket Council's minimum requirements. The games would use drop-in pitches for the first time in international cricket in England, though questions remain over whether the outfield would meet World Cup standards, and over the costs of adjusting the stadium to host cricket. The ICC has yet to inspect the ground but is understood to be keen on the concept.

The ECB is conscious the total attendance for the 2015 World Cup in Australia and New Zealand topped one million and aspires to get as close to this figure as possible. Using the London Stadium for two matches would increase net capacity for games at the tournament to around 900,000.

All matches for the World Cup have already been allocated but the organising committee would compensate grounds that give up matches, guaranteeing the same financial benefits as if they had hosted an extra game. The Oval, which has been awarded five games, is likely to lose one match, though Surrey would be relaxed about the prospect.

Should the World Cup matches be successful it increases the likelihood of the London Stadium being involved in hosting games in the new city-based T20 tournament if it coincides with the venue being available to stage cricket.

You can read the original article from the Guardian HERE