Finally after eight years of hard work, the 2012 Olympic Games will be held in London, the International Olympic Committee has announced. After a series of anxious votes, which saw the bids from Moscow, New York and Madrid eliminated at the IOC meeting, London has won the two-way fight with Paris by 54 votes to 50 in Singapore.

Paris who had been favourites throughout the campaign saw London's hopes raised after an impressive presentation by Lord Coe.

IOC president Jacques Rogge made the announcement nearly an hour later than expected at 1250 BST. It will be the first time the Olympics has been held in Britain since 1948.

Coe said: "This is just the most fantastic opportunity to do everything we ever dreamed of in British sport."

This announcement will obviously reap benefits for the sports and amenity Industry. Not only will there be work available within the Olympic village and designated Olympic sites, but hopefully further renewed interest in sport as a whole.

The excitement generated by the successful Olympic bid will no doubt increase year on year until 2012.

Shares in UK construction companies began to soar on the London Stock Exchange and mortgage lenders forecast a boom in house prices in the capital city.

It also provides a wonderful showcase for the skills of the professionals in the sports turf industry, from the companies supplying the products and machinery to the Groundsmen and Greenkeepers maintaining the surfaces on which the Olympic events will be held. All of London's landmark sports facilities, including Wembley, Wimbledon and Lord's, will be hosting events. Three of the capital's parks - Greenwich, Hyde and Regent's will also play key roles in staging events such as Equestrian, Modern Pentathlon, Triathlon and Baseball. Once again we have the opportunity to show how good we are producing the world's best sporting surfaces.

Given the unwelcome criticisms voiced by the French President prior to the voting, we thought that we'd make a start on redressing the balance..... 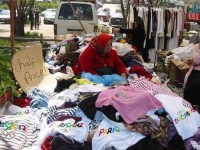