Following extensive course reconstruction and the deployment of a Toro ProCore 648 aerator, Long Ashton Golf Club, near Bristol, has alleviated a waterlogged greens issue that was losing the club multiple days of play a year. 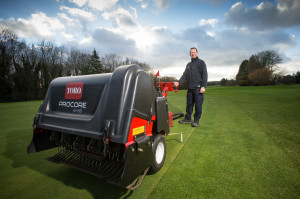 When course manager James Braithwaite initially analysed his records back to 2007, he found that members were losing as many as 35 days play per annum due to waterlogged greens.

Working alongside the STRI, he developed an ambitious plan to reconstruct 14 greens to alleviate the problem and set a timescale of just five weeks to complete the project.

James says that during the process, coring and tining were established as a key part of getting the greens back to a condition that the club's members demand.

Part of that process saw Lely UK, sole distributers of Toro equipment in the UK, allow the club to trial a Toro ProCore 648 - one of the most productive and efficient walking aerators on the market.

"Initially Toro lent us a ProCore 648 to do the job, this machine working impressively well," says James.

Having been so delighted with its performance, James took the move to invest in his own machine, which he points out has been used extensively ever since.

"It really helps maintain good aeration, keeping the drainage channels open and allowing the heavy spells of rain to percolate through the turf layer quickly into the new profile, keeping the greens in play," he explains.

"We pride ourselves as being among the premier courses in the area but losing so many days play to wet greens was a problem," says James. "So we had to do something as other courses' greens remained open when some of ours were closed."

Since the course reconstruction and the ProCore 648 has been put to good use, heavy rainfall has put the improvements to test. The result, says James, is that the greens now drain freely and have been consistently firm and ready to play each day.