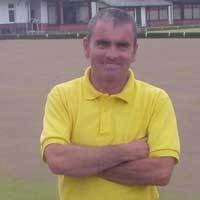 To ensure all the greens are prepared for the day's play, Hugh and his staff have an early start, arriving at Northfield before 5am each morning. Preparation begins with the lads brushing all the greens to remove dew and debris from the playing surfaces.

The height of cut on the TORO pedestrian machines are checked, making sure they are set at a height of 3mm for the Championships. Each morning all five greens are double cut and rolled with the turf iron, generally taking about 3-4 hours in total to complete these works.

Play starts every morning at 9.30am with matches scheduled to finish about 12.30pm. The lunch break enables Hugh some time to undertake some additional rolling, using the turf iron.

Afternoon play resumes at 2.30pm with sessions lasting anything between 3 and 4 hours. When play finishes, Hugh and his team complete a single cut of the greens, finishing the tasks at about 9pm.

Hugh and his staff are kept busy with other duties during matches, keeping the site clean and tidy, moving furniture and scoreboards. But, more importantly, being on hand for any eventuality.

Hugh did have some concerns about the speed of the greens at the start of the championships. The weather was cold and wet, which normally produces slower surfaces. Fortunately, the weather warmed up and the greens began to dry out, increasing their speed which is currently measuring at twelve seconds.

The fastest the greens have been ever measured is thirteen, so the indications are that they are speeding up nicely for the finals.

Today, Thursday 29th July, is a rest day with no matches being played, enabling Hugh to apply Amino-sorb, an acid based supplement that helps the turf recover from stress. The sward on the greens are quite susceptible to stress, especially as Hugh has not been feeding or watering the greens prior to and during the championships.

With the championships now reaching mid point, a number of the fancied teams have not played as well as expected, notably holders Australia, who have found the greens quite difficult to play. Hugh believes this may be due to the fact that the Aussies generally play on a differently prepared surfaces back home, often maintained at shorter mowing heights.

The excellent condition and playing qualities of the greens during the championships is due to the hard work of Hugh and his staff during the earlier part of the season, when all the important feeding, grooming/verticutting, scarifying, top dressing activities were carried out. Hugh was particularly pleased with the Thatchaway machine lent to him by Greentech and which removed an amazing amount of debris.

Hugh is hoping the weather will continue to improve during the second half of the championships, enabling the greens to become even faster and firmer. This may even help the Australians get some better results during the pairs and triple matches due to start next week!

For the next week or so Hugh and his team will continue to rise early and go home late, dedicated to producing the best bowling green surfaces possible for the world's best teams.