by External source
in Football and People
on 13 Jan 2016 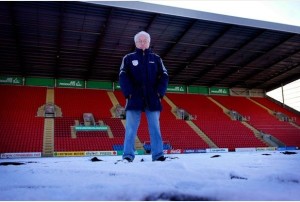 Crewe Alexandra's manager Steve Davis has thanked long-serving groundsman John Huxley for his years of service after the 77-year-old retired this week.

John has worked on the pitch at the Alexandra Stadium as well as those as the club's Reaseheath training ground, and Alex Soccer Centre before that, for over 30 years.

Davis has known John since his playing days at the Alex and admits he's become a popular figure around the club.

He was voted as Second Division groundsman-of-the-year back in 1997 and plied his trade at Stoke City before moving to the Alex in the 1980s.

But after putting away his mower for the last time, Davis said: "I found out yesterday and I had an idea because when I spoke to him two or three weeks ago he was thinking about it then.

"I'm not sure how old he is because he looked old when I first came to the club in the 1980s so he was working at Gresty Road then."

"He seems to have been around forever, he's been a great servant and everyone who leaves has always been a big part of the club.

"You become part of the furniture almost, you get used to saying hello every morning and John was one of them."

"He's done a brilliant job over the years and hopefully he can enjoy a bit of time to himself, his retirement, and we wish him well."

Read the full story from The Sentinel HERE