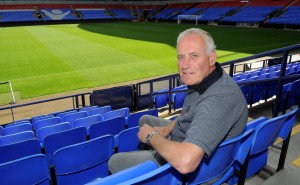 For 24 years he saw his hard work at Wanderers trampled on a daily basis, his prized possession regularly cut down in its prime

He got harangued in every pub in Bolton, partly blamed for the club's poor home form in the Colin Todd era and was responsible for muddying the knees of superstars from Jay Jay Okocha to Eidur Gudjohnsen.

It was quite literally like watching grass grow for long-serving groundsman Richard Norton but after nearly two-and-a-half decades in charge of the pitch he has mowed his last blade at Bolton.

When Norton arrived at Wanderers the White Hot era had yet to begin and the club was only just getting back on its feet thanks to the tireless fundraising of people like Alf Davies and Nat Lofthouse.

It was 1991, Phil Neal was in charge and with plans to move to a brand new stadium still in their infancy, the brief was clear.

"When I came in they just said 'keep us going for six years' - it was just a case of rolling the mud flat, making sure we could get bums on seats at Burnden Park and keeping games on," he told The Bolton News.

"We had to try every trick in the book in those days because every single penny was accounted for, nothing wasted.

"The club had almost gone under and Nat had been on the pitch asking people to join the Goldline. But things were slowly changing and I think they knew when I came in that there would be a new stadium on the horizon."

Hull-born Norton had worked at Wimbledon and the old Wembley Stadium before replacing Alan Whittle, who had fallen ill.

With the club embarking on a move to the new Reebok Stadium there was much debate about the kind of pitch that would be needed in the purpose-built arena.

But as Norton explained it took him almost a decade of arguing with the club's hierarchy before finally getting the surface the team deserved.

"People ask me has it been a labour of love, well it's certainly been a labour," he laughed. "When we moved to the stadium everyone was marvelling at the building but you have to understand grass is a living product, it has to be nurtured and loved. Someone has to be out there every day with it.

For the full article, visit www.theboltonnews.co.uk.