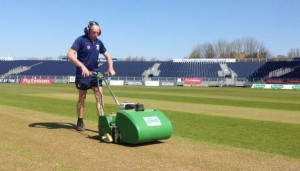 The second Test against Sri Lanka starts at Emirates Riverside on May 27 and many more days like yesterday's washout will not suit the man who took over the job last season.

"I was asked at interview how long it takes to get to know a square," he said. "I said three years, but I could be here for 30 years and still not fully understand this one.

"I did learn a lot in my first season and I spoke a lot during the winter with the original groundsman, Tom Flintoft. He said there is so much water underneath, partly from tributaries running to the river, that it makes it very difficult to dry pitches.
"Also, in taking away the natural slope to the river they levelled the ground to its lowest point, which took the square closer to the water table. Pitches might look dry on top, but underneath they can be soaking wet."

The banks of the River Wear are a far cry from Ascott Park, the family home of Sir Evelyn de Rothschild, where Demain began his career, tending the 100-year-old estate ground used by Buckinghamshire.

He graduated to Northants' outground at Milton Keynes, then Uxbridge before becoming No 2 at Trent Bridge.

"When this job came up the prospect of being head groundsman at a Test venue was a spur and I'm excited about the Test coming up.

"I know which pitch we are going to use. Obviously it has to be central and one of the five or six suitable for televised matches.

"It will not be the same one we used for the one-day international last year. There's no scientific reason for the selection. It's the one which looks the best and we also consider how it played last season."

Unlike his predecessor, Dave Measor, Demain avoided being flooded out of his house next to the river over the winter, although only just.

"The first part of the winter was good for us in terms of growing grass," he said. "There was a long germination period, so the grass coverage is a lot better than last season, when there were five pitches I couldn't use because of the lack of grass.

"After Christmas it got very wet and the outfield is still sodden. One of the first things I did here was get the soil analysed and found it was lacking air, probably because of the flooding.

"We have done a lot of spiking to get some air into it, which can only help. Hopefully, we'll see some improvement."

For the original article, visit www.chesterlestreetadvertiser.co.uk.