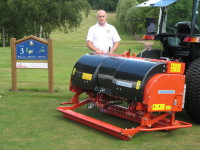 A progressive Birmingham course has just invested in both a new Wiedenmann Terra Spike XD6 and Iseki TG5470 tractor, calculating that within four years they will have recouped their joint cost by saving on contractor fees.

The team at Harborne Golf Club, led by course manager, Jim Gilchrist, selected the XD6 as an infinitely reliable all-rounder. Now the machine is pivotal in their long term strategy to maintain the course to the highest professional standards.

Previously Harborne had called in external help to carry out all aeration. "Our contractors were fabulous, they too, favoured Terra Spikes, but we were tied to a fixed date programme of greens and tees done once and fairways twice. We had to gamble on the correct weather conditions and had only the budget for solid tining, never quite being able to stretch to needle tining or hollow coring," says Jim Gilchrist.

"I knew early on I wanted a Wiedenmann and with guidance from Jon Lewis at dealer TH White's of Redditch, I concluded that the Terra Spike XD6 was the most sensible choice for us, giving flexibility in depth, tine size and ease of operation.

It was important to Jim Gilchrist that all four of his team could operate the XD6 to allow him to rotate jobs and develop their roles.
"Some younger greenkeepers can be a little intimidated or nervous when using a large piece of equipment especially on a golf green. However, changing tines or adjusting hole spacings on the XD6 is so simple and straightforward that everyone can use the machine. Wiedenmann's Chas Ayres [Sales Manager] gave the team a really thorough training session on delivery, which in turn made my job easier.

"We now have so much more flexibility. For the coming year our monthly programme includes spiking and hollow coring greens and tees; aerating fairways and walk offs from green to tee twice - something we had never been able to do regularly. In addition we plan monthly passes from May to September with the 5 mm needle tines before verti-cutting the greens then following up with a light top dressing. This will considerably help our root development as well as allowing air to circulate with no disturbance to the putting surface."

Harborne boasts a heavy clay soil with the fairways and tees having a tendency to dry out during summer time. Drainage across the whole course is now very good as during the last five seasons, the greenkeeping team has systematically targeted the wettest areas of the course.

"Some of these wet spots would hold water for a number of days. Particularly persistent rainfall would cause several of the greens to hold water for longer periods. Now these areas have been drained in-house, and coupled with the purchase of the XD6, we are expecting a significant reduction in course closures."

"Having the support of the greens chairman, committee and general manager has also meant that we can concentrate fully on keeping the course in top shape," concludes Jim Gilchrist.

Harborne GC's long term focus, combined with effective management, regular investment and hard work has helped the city centre club grow its membership to around 600. Its forward planning means in four years the club will have an asset which has paid for itself and saves all future annual contractor costs while expanding the skills and self sufficiency of the greenkeeping team.