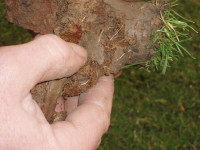 Warrington Sports Club has found long-term solutions to wear and weather problems on its cricket and rugby pitches through a series of trials using Barenbrug grass seed.

The club offers its 1,200 members a wide range of sporting facilities, including three rugby pitches - two for seniors and one for juniors - two cricket pitches, four shale tennis courts and six squash courts.

But continuous play and extremes of weather over the past few years have put the cricket and rugby turf under enormous stress, posing something of a headache for head groundsman Paul Agar. "We are a well-used facility, so the grass gets quite a battering," he explains. "In addition we have very free-draining soil and we don't have an irrigation system. The result has been stressed turf."

But Paul, who is also ECB pitch advisor for Cheshire, is always keen to try new ways to improve the turf. Over the past few years he has been working closely with Barenbrug, trialing a variety of grass cultivars and mixtures to find long-term solutions that will help the turf stand up to the elements and the rigours of play.

"It's vital on our cricket squares to get good germination as early as possible at the end of the season to ensure lasting growth for the following year," explains Paul. "With this in mind Barenbrug's Jayne Leyland advised overseeding with Barcampsia tufted hairgrass and Barkoel crested hairgrass which have characteristics of good root density.

"In year one we sowed a little too late," Paul says, "so establishment wasn't good, but in year two we saw a real improvement. We mixed the two cultivars and it established well, and produced a much finer leaf than the ryegrass. The main benefit was that the ball bounce noticeably improved. My theory is that the increased root density keeps the soil together and reduces cracking, which absorbs less of the ball's energy - therefore a higher bounce is achieved.

"In year three we overseeded again, this time with BAR 40, which is a mix of 75 per cent Barkoel and 25 per cent Barcrown. Again, we saw good germination, and density and play has improved as a result. I'll stick with this mix for the foreseeable future."

On the rugby pitches, the turf gets some harsh treatment. Practice play and matches really take their toll on the grass and Paul needed to find a grass mixture that would hold the pitches together for the duration. "They were bald at the end of the season, but for the past two years we've been using Barenbrug's RTF seed, which is a rhizomatous tall fescue with some amazing characteristics. Jayne recommended it because it has such a good rooting depth - up to one metre in the right conditions - which helps find vital moisture in the free-draining sandy loam. We've been using a BAR 10 with RTF mix, which includes ryegrass for fast germination.

"We're really pleased with the cover we've had, and although by the end of the season the turf was still ripped up, there were patches remaining that weren't there in the past. So I'm confident that over time we'll see the turf thickening up and filling out those bald areas.

"This is a long range programme," adds Paul, "you can't expect it to happen in one or even two years. Barenbrug is giving me valuable advice and really helping me achieve all-round improvements. I'm always delighted to trial their products because quality is never in doubt."