0 Look before buying, think before applying

In the ongoing discussions about the effectiveness of particular commercial products on turf quality, it might be worth taking a step back and looking at the materials that are routinely applied to turf. The aim is to distinguish those that have been tried and tested in effectiveness from those that haven't. I am not including in this article the routine mechanical operations required to maintain a top quality surface. 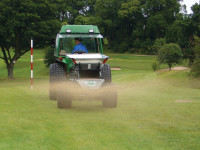 Used for routine maintenance of most intensively used sports turf surfaces. Assists in surface aeration, protection of the growing turf and flattens out any indentations in the turf surface. Experiments have shown that where topdressing of the correct particle size range is applied to turf, it will have a very significant positive effect on turf quality and wear tolerance.

Fertiliser
Nitrogen fertiliser is vital for the adequate growth and wear tolerance of turfgrasses. There have been many trials results indicating the optimum requirements of nitrogen fertiliser for turf. In addition, it has been shown from trials over many decades that the form of nitrogen has a large impact on turf quality (e.g. ammonium forms of N are preferable to nitrate forms for fine fescue-bent turf).

Trials have also shown that phosphate fertiliser may be required by turf, particularly that growing on a sand-dominated construction. Any requirement can be ascertained by soil testing.

Although there has been much interest in potassium fertiliser in recent years, there actually is little experimental evidence that fine turf suffers from deficiency under UK conditions. The main response to fertiliser potassium is in an enhanced tolerance to drought conditions.

As for the other ten essential soil-derived nutrients (e.g. sulphur, calcium, magnesium), again there is no experimental evidence that fine turf suffers from

deficiency in any of these in the UK. If soil tests do show concentrations to be low (which might be the case in sand-dominated rootzones), then it is a relatively cheap and straightforward matter to apply elements such as sulphur as a precaution.

Pesticides
All fungicides, herbicides and growth control agents used in turf maintenance have been experimentally tested for their effectiveness. Indeed, they can only be sold legally for such purposes if they have been tested for their ability to control fungal disease or weeds or pests.

Wetting agents
Wetting agents have been shown, through field trials, to have a remarkable effect on the ability of the turf rootzone to retain moisture during dry weather conditions. The extent of their wetting properties may vary between products, but there is no doubt that they do aid drought tolerance.

There are a number of products, which, in theory, could have a positive effect on turf quality. These may be products that have been used with success in other areas of horticulture or agriculture. An example of this would be the use of manganese to reduce take-all infection of cereal crops. As the species of fungus causing take-all infection in turf is the same as that in cereals, it would make sense to ensure that rootzone manganese concentrations are adequate in turf; especially on sand-dominated rootzones.

There are species of microbes that specialise in the break down of cellulose, the main component of the turf thatch layer. It makes sense to suggest that application of such microbes to the turf surface may assist in thatch reduction.

However, it should be remembered that within "the possibles" there is no extensive, practical evidence that products which work in other areas of horticulture will necessarily work for turfgrasses.

There are a number of products aimed at the turf market which have no theoretical basis, horticultural basis or experimental basis for the likelihood that they will provide any benefit to turf quality. The only way that an actual benefit can be shown is where the product is applied to an area of turf and compared with a non-treated area, which, in all other aspects, has been maintained identically. Moreover, in order to properly verify any effect, it would be necessary to set up at least ten such comparisons.

It is simply not possible to say whether a particular product has had an effect on turf quality by applying it to all 18 greens of a golf course. No proper comparisons have been made with untreated turf areas.

Therefore, I would suggest that before applying any of the non-tried and non-tested products to turf, it is vital that sound evidence for its efficacy is obtained. If you are not sure, then it is a good idea to obtain some independent advice.