0 Looking back to look forward 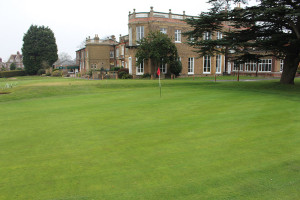 Andy Church of Ultra Soil Solutions looks at how one club in Kent has overcome the problem of split personalities between his greens and saved money into the bargain.

Chislehurst Golf Club, founded in 1894, is an 18 hole course situated within 70 acres of beautiful parkland in the heart of town, only eleven miles south east of Central London.

The course is a truly demanding test of accuracy rather than length, and will challenge golfers of all abilities, consistent with the design influences of the great Harry S Colt. It possesses a charm quite distinctively its own.

Meeting with John Hunnisett, Course Manager at Chislehurst Golf Club in Kent, came about through his desire to seek a solution to an age old problem!

Despite the programme of wetters and the usual modern day remedies that are suggested by well-meaning trade representatives on a daily basis, he was suffering from wet, spongy greens and approaches that were slow to drain. In his eyes, there was something missing from the available treatments for such circumstances. His experience was also showing that, despite traditional aeration, the problem was not improving at the desired pace.

The course incorporates a valley in which several holes sit. Disregarding the wonderful aesthetics, and challenging topography from a golfer's perspective, this gives John and his team a course with greens of split personalities. Those nestling in the valley tend to be the ones that hold water in the winter, whilst they are also the greens that see the worst dry patch and hydrophobic soil related issues during periods of hot weather. The greens at the top of the course, and those around the idyllic clubhouse complex, enjoy a more settled environment and tend to show a more even distribution of moisture and nutrients through the profile. 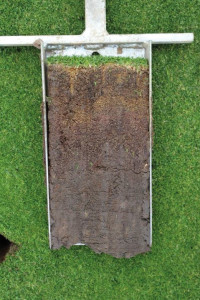 John needed a treatment that would work in all of these circumstances, and also save him money on expensive fertilisers and wetting agents that did not appear to be curing the problem!

He concluded that the flocculation of the rootzone, along with some remedial drainage work, was what was needed. In days gone by, greenkeepers would look no further than an application of gypsum (calcium sulphate) or lime (calcium carbonate) for this purpose.

With the use of traditional forms of gypsum and lime in modern greenkeeping being limited, due to the difficulty of application with the powdered form and the relatively slow action of the pelletised version, John was delighted to find that a fast acting liquid variation of both was available.

Having trialed a liquid gypsum (Gyp-Flo) during 2014, and seen some very encouraging results, he had gained a good understanding of the benefits associated with the use of fast acting calcium sulphate.

During my visit in February 2015, the changes that had occurred in the greens were perfectly displayed. John has radically changed his approach to greens management by taking a closer look at the soil's needs, the biology of the soil and the availability to the plant of the nutrients he applies.

Despite regular applications of wetting agents prior to 2014, the greens displayed the common characteristics of many UK greens; water retention in the upper 50mm of the profile, diminished response to fertiliser application, dry soil below the upper 50mm zone, black layer formation and surfaces becoming increasingly difficult to manage. For the first time, John can see a real improvement in the general health of the greens and approaches, along with a feeling that he is able to manage the growing environment proactively, rather than having to be reactive to recurring problems!

So, what has changed? 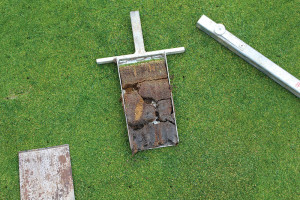 John explained that, since using Gyp-Flo liquid gypsum, he has been able to almost eradicate the need for wetting agents, employ the use of targeted fertiliser application to suit the plant's needs and he is consistently producing healthy, fast playing greens, despite adverse weather conditions.

The greens that would normally prove to be problematic during hot weather had displayed minimal signs of dry patch, and he had also been able to reduce the aeration programme and be more selective in his timings; in short, the soil was being allowed to manage itself.

In common with most iquid gypsum users, John now looks closely at what his soil needs rather than simply applying what is available. The understanding that traditional soil amendments were not just used for nostalgic reasons, they were applied because they were highly effective, has made him and many other greenkeepers like him revisit the benefits gained from naturally occurring materials!

It is a widely held view that the closer we look at modern day greenkeeping, the clearer it is that we are actually inhibiting the soil's natural ability to function by some of the modern substances we apply. By looking more closely at what we now don't do, we can be clearer on what we need to do in order to create a more natural soil biology within modern day sports surfaces.

With the pressures put on all those managing sports turf surfaces to produce quality whilst reducing expenditure, a look back really is proving to be giant leap forward!