2 Looking for the Legend

Looking for the Legend

After speaking with a greenkeeping colleague at a recent conference and hearing his enthusiasm for a course restoration project in the Scottish Islands I was hooked. When I saw the pictures I booked the flights. Now, being a traditional golf enthusiast, the thought of helping create a links is second to none, but when the legend says Old Tom had been there before it was a must.

The story starts when my colleague, Gordon Irving, went to the factor of South Uist, one of the islands of the Hebrides, to hear if he could develop his passion for fishing. Little did he know what he would be asked to look at, after a couple of cups of tea and a few yarns. 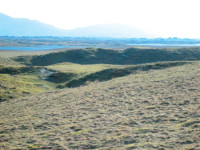 The factor heard that Gordon's other passion was golf, not playing but maintaining courses, and not just any golf course, but links courses.

The stage was set. Gordon had spent his apprenticeship at Turnberry, and had gained a reputation in the industry for his passion for links and traditional golf, latterly reinstating one of England's finest links at Deal. With this knowledge in his armoury he set out on the short journey to where the course lay. He had not anticipated what he would find.

The story goes that Lady Gordon Cathcart invited Old Tom Morris to lay out the 9 hole course at Askernish in 1891. Rumour had it he had come to the island for a fishing trip. If the records are correct the course was laid out at about the same time as Machrihanish, which is regarded as one of Old Tom's best. If the course at Askernish proved to be half as good, it would still be an excellent links.

On arrival at the airport on the island of Benbecula, with some spectacular views of the island of South Uist on the way in, the scene was set. The snow at Glasgow was in the past, and the sun shone on our arrival. The man who started the project, Ralph Thompson, a true Scot in every sense of the word, proud of the islands and proud to be Scottish, met us.

Ralph had played golf on the Askernish course for 20 years. He did not know if the holes were the same as Old Tom had laid out, and it was thought there were originally 18. The challenge was to find the holes or at least try to recreate what Old Tom might have done.

Having read the book by Robert Kroeger on Old Tom Morris courses the references were there. Coupled with islander accounts from before the war, they seemed to concur. There were reports from one islander that he had caddied at the north end of the site, and a book from the early 1900's by a local teacher made reference to the course. All we had to do now was find it! Also meeting us at the airport was Martin Ebert, a golf course architect who had previously worked with Donald Steel. 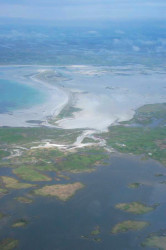 Having been lucky enough to have worked on what I consider to be some of the best links in the UK I felt also that I had something to offer the team. We seemed more like archaeologists than course architects and course managers. On the way to the course site we took in breathtaking views of the barren land.

There are no trees, just heather and peat, and you really get a feeling for how hard it must have been to be a crofter on the island. This was backed up by the history lesson we gained from Ralph about just how hard life has been and how many people are now leaving the islands.

I could not help thinking, 'maybe we in some small way we could give the islanders something to help'. Who knew? And then we arrived. At first, on the drive up, I could only compare it to Kingsbarn's flat farmland, but when you arrive at the dunes, wow! And remember this is all made by nature!

The crystal blue sea framing the whole picture. The course the islanders had been playing was great, though a runway put in at some stage had split the course, and some greens were not original. So we started to investigate.

At first we went south. Now, I have been to County Down, Birkdale, Lahinch and, of late, Doonbeg, all of which are must play courses, but this site took my breath away. And to think Old Tom had been here was fantastic. For every rounding of a dune another hole appeared. If ever there was a heaven for links golf this was it, every one in the party was agape.

We managed to find what we thought were green sites, they had been touched at sometime, but it was hard to find routing to them because of the landscape's ability to produce a hole on every turn.

However, in the end the course designed itself. On many of the holes we even joked "where should we go now?", the holes were just so obvious.

The north of the course was a little more gentle but nonetheless interesting and challenging. We also found green sites that were almost to good to be true, along with some of the natural bunkers, which can only be described as nothing short of fantastic.

If all goes to plan the islanders will be able to offer the course to the public in 2007-8 and, if the welcome is anything like we received, it's worth it just for that. When finished, it is a must play site to experience links golf as it was, not commercial, not green, but just a challenge. This is not man against man, but man against nature.

The upside of this is a course which is at one with nature and, with careful management, will stand up as a pillar of environmentally friendly golf. One maybe never to be repeated. The sheep will always graze the links in the winter along with cattle, but this just adds to the atmosphere of the place. Life goes on with the links in the middle.

How much more honest does it get? This for me is the essence of the great game and I hope Old Tom would be proud of what we are trying to achieve.