0 Louth Cricket Club - doing it for the girls!

The small market town of Louth is known as the 'capital' of the Lincolnshire Wolds and has a population of just under 16,000. Dominating the skyline is St James' Church with its 295 feet spire; the third tallest in the UK behind the cathedrals of Norwich and Salisbury.

Louth forms part of the East Lindsey district of the county, and it is the District Council who have been responsible for bringing top flight international sport to Lincolnshire for the first time, in the shape of the England Women's cricket team, for a one day international against Pakistan.

As part of a £12 million investment in new leisure facilities in the district, £2 million was made available to upgrade the sports ground at London Road to include seven football pitches, a new cricket oval and a floodlit, full size Astroturf pitch. The £2 million was made up from grants from various governing bodies and authorities, with £1.4 million provided by East Lindsey District Council, £0.5 million by the Football Foundation and £90,000 from the England & Wales Cricket Board. It was here that the match was to be played.

A cut and fill construction of the ground was carried out to form the playing surfaces and provide an elevated position for the pavilion. Work was completed three years ago.

The Pavilion Ground, as it is now known, is home to Louth Old Boys Football Club, Louth Cricket Club and Louth Hockey Club. Facilities within the pavilion include eight changing rooms and two additional rooms for officials, a clubroom with bar and a viewing terrace and balcony.

The Pavilion is managed by Shaun Mullaney, who was trained at Loughborough University and is no stranger to elite sport and managing high class facilities. He has a Duty Manager, Jason Collinson, who is based at the ground. Head Groundsman, Martin Deans, and part-time assistant, Dean Webb, look after the grounds and pavilion facilities on a day to day basis.

Martin is responsible for managing all the playing surfaces at the club and is currently contracted for thirty hours a week. However, like many groundsmen, he often puts in more hours to provide the appropriate playing surfaces for the end users.

Prior to coming to the club, he ran his own landscape business in the area for many years, whilst also looking after several cricket clubs and being the ECB Pitch Advisor for Lincolnshire.

Click on the following link to see interview with Martin Deans

Martin had invited me over to see how preparations were going for the big day and, when I arrived at the ground at 8.00am, just a couple of days before the game, he was busy finishing off the cutting of the outfield with an Allett Regal 42" kindly loaned to him by Allett's Lee Bowers through their dealership, Burdens Turfleet Hire at Sleaford.

Once that had been completed, we sat down for a coffee and I began by asking him how long he had worked at The Pavilion?

"I started here in February 2010. Before that, I looked after a club just outside Grimsby and also had my own ground keeping and landscape maintenance business."

What happened to all your customers and what did you do with your machinery?

"I slowly filtered them down to a point that I can manage with my current role and, as for the machinery, a lot of it had reached the end of its life, so I got rid of it."

How did the opportunity to host the Women's ODI Game come about?

"Arran Brindle plays here, and also for England, so we do have a connection with women's cricket. Her husband, James, is very active in the cultural events team at the council, along with many of the local councillors who are passionate about the sport, plus the relationship we have with the ECB has all helped."

It must be a great coup for the club? 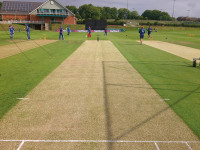 "Yes, definitely. Lincolnshire has never hosted a senior international event. They have had some under-21 internationals, but not in cricket or football. They've played lower level international football in the county but, in terms of big events, this is the first time Lincolnshire will have seen it. It's great to give people that knowledge of international sport and the fun that goes with that. It's fantastic, and the council are to be commended."

Do you work here full time?

"I'm here on three-quarters time and the rest of the working week is spent doing the ECB Pitch Advisor role for Lincolnshire.

Do you have any other groundsmen helping you out?

"We are actually trying to build up a team, but I am mainly the only groundsmen on site, although Dean Webb helps out part-time. So it's challenging, especially for events like this."

"I have a set budget to pay for materials, machinery and end of season renovations. We use a sports ground contractors, Premier Turfing, for football pitch renovations, and Duncan Beal from Ashby Grass Care as our fertiliser supplier."

The pitches are looking great and it's a lovely view. You must love it here?

"Yes, I couldn't ask for a nicer place to work, there are not many mornings I don't look forward to coming here. In total we manage about six acres of playing surfaces, with the football pitches taking up the lion's share of the play space. I also look after the artificial hockey/football pitch, two cricket practice nets and one artificial cricket wicket."

The square looks quite small, how many pitches do you have?

"It's just the ten pitches on the square, so it's quite small compared to some others around the country. But we manage it; it's quite a high clay content (33% Ongar Loam), so moisture management is key out there."

What's been your pitch preparation for the ODI?

"It's been about 10-14 days but, because of it's high clay content, it can dry out quite quickly. But, as you can see, the covers are still on just to protect it for now and then the sun will probably get back on there later today."

Mother Nature helped us out a lot, with the rain last weekend and with still 6-7 days to go, it was moist and then dried naturally."

What's the typical working week for you?

"Well, it's always very busy. We get pulled into the facility as well, with a lot of bookings and people arriving, so we have that to contend with all that and get on with the relevant grounds maintenance work required. We usually start at 8.00am and finish at 5.00pm."

How many times have you mowed the outfield then?

"I've lost count to be honest. I try and do it three or four times a week, but last week was a bad week. It sat in dew a lot and was very moist, so you can't just get on with it. So, then you have to treble cut on a Saturday morning, which is just before play."

How have the wickets been performing?

Very good, yeah they've been performing well, maturing nicely; it's been two or three years since the reconstruction and they are now playing well. You can get the odd iffy one at times if you try and squeeze an extra game out. They offer good bounce and good spin as well; everything you could hope for really at a high level of semi pro cricket."

So when do the ladies arrive then?

"Both teams are currently over at Loughborough and they will come over to Louth, probably Saturday night, ready for net practice on Sunday [31st June] at 1.00pm. We have two sessions, England and then Pakistan, and then they return here for the match on Monday. "

"We have prepared two net bays for them, so all the fun will begin here on Sunday, the day before the match. They start at 10:45am on Monday, so it will be a early start for us, probably about half past six that morning just to make sure it is as good as possible."

Have you enjoyed the challenge?

"Yes, it's always a challenge, and challenges are the best. That's what you want, isn't it? It's been a different side to the recreational game, 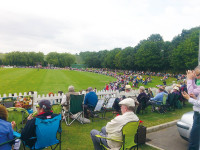 one that I've never experienced before, I've done a bit of low level county work before in my younger days; put myself about a bit and gathering information."

"As I say, it's been a big step up from having them here last year against the RAF when there wasn't as much pressure compared to a fully fledged one day international. So, yeah, it has been a challenge and, hopefully, it will be worthwhile."

So you have flat sheets and covers?

"Yes, we have two flat sheets, which cover the whole square, and four mobile covers. We have good drainage (5m centres) as well, so we don't really worry too much about water. Our drainage is probably as good as any other international ground really."

"We hire a verti-drain twice a year to aerate the outfield. If we had the money we would get our own, but we don't, so we hire. I try and cut the outfield at least two or three times a week to maintain a grass height of between 15mm-25mm. We also have a Ransomes 213. It's used 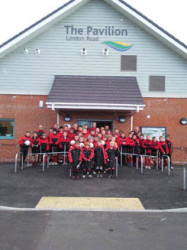 universally across the site. It does a good job on the football pitches. We have two senior football pitches, an intermediate pitch and three mini pitches which are all played on the cricket outfield. Now we want to try and keep the pitches in as best condition as we can after the winter we had."

What are your after match repairs?

"We will sweep some of the debris back into the holes then fill them back in. Where we can't do that we replace them, by making a bit of a mix with the loam. Dust up, clean it up. We will then fully irrigate the square, flood it through again, let it dry and sort out the repairs."

"I don't get on well with overseeding, we don't have any success. We have a least three games a week here, and I find you are just getting it growing and then someone will come along and go and skid through it all and rip it all out. It doesn't look cosmetically brilliant at all times, but that's what it's there for, to play cricket on."

After this match what opportunities do you think will arise?

"Well, we are hoping that this is the first of many top games here. Hopefully, people will see the benefits of playing in front of a reasonable crowd."

As I leave Martin to continue with his work, I am left with the impression that here is a man who is excited about the big day, but who seems to have it all under control.

On the day, even the script writers were provided with the perfect scenario as the Louth Leader proclaimed "Arran Brindle stars with bat and ball as England beat Pakistan in Louth". She and her opening partner and captain, Charlotte Edwards, got England off to a fine start, with Arran finally out for 55, an innings that helped the home side reach 227-7 off their alloted overs. Arran then took 1-16 off six overs to help bowl out the visitors for 116.

Martin was delighted. "Overall, the day went very well. We had a packed house, with 2,000 spectators, decent weather, and a deck that played well with runs scored and wickets taken, which is always the aim in one day cricket. The feedback we have received has been excellent and, hopefully, this game will be the first of many at this level."

"The long hours were certainly worthwhile and, in the end, it was thoroughly enjoyable, although it all seems a bit of a blur now, looking back."