With provincial outfields around the UK recovering from winter, freshly oiled bats drying in kitchen corners and whites cleaned and pressed in preparation for another exciting summer of cricket, Yorkshire side Wetherby Cricket Club got its 2015 season off to a flying start - before even a single ball had been bowled - as the winner of a sought-after cricket coaching mat. 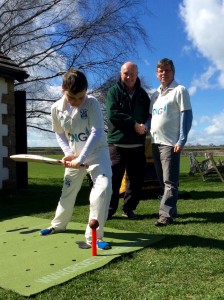 The twitter prize draw, organised to celebrate the re-launch of total-play Ltd's online store thecricketgroundshop.co.uk, saw Wetherby's win come courtesy of Yorkshire County Cricket and England Lions player Alex Lees who, in the absence of club captain Andrew Gale, is currently captaining Yorkshire. Alex picked a random number to select the lucky winner and chose 14 - the same number he wears while scoring runs for Yorkshire - which coincided with Wetherby's randomly allocated number for the draw.

The prize represents a real coup for the club, with the coaching mat having been described by many that use it - such as Idle CC and South Shore CC - as: "the best thing they have ever bought for their juniors"; and by coaches like Kevin Brown of Gotham CC as: "the best aid I have used to coach batting".

"It's been great working with Coaching Cricket Mats Ltd to run our re-launch twitter competition and we'd like to thank David Cooper and his team for supplying such a fantastic prize. All the products we stock are hand-picked for their quality and performance by cricketers who really understand the game, and the coaching mat is a great example of this. We'd like to congratulate Wetherby CC on their win and wish them well for the new season."

Wetherby CC Chairman, Arthur Probert, explains what the prize means for the club:

"We're delighted to have won the cricket coaching mat, and I know the coaches are especially looking forward to using it over the next few years. I'd like to take this opportunity to thank total-play Ltd and Cricket Coaching Mats Ltd for organising the competition and supplying the prize and, of course, to Alex whose number certainly proved lucky for us!"