Lytham Cricket Club have recently adopted an environmental policy which covers both the club grounds and buildings. The policy has been driven by Peter Harris (left), the club's Grounds Chairman and Head Groundsman, Les Stephens, both confessed 'ecology nuts'.

Somewhat neglected over the years, this area had attracted rubbish and occassional fly tipping. It was crying out for attention.

Lytham CC is situated just a few yards from the mouth of the river Ribble and the Irish sea on the west coast of Lancashire. It is close to the town centre with a main bus route adjacent to the southern border and a single track railway to the north.

Just across the railway is Witch Wood, a public area looked after by Lytham St Annes Civic Society. To the west, the border is shared with St Cuthberts Church with further small areas of woodland plus a pond. These areas of woodland are divided by Lytham CC.

As a result, there has been a break in the wildlife corridor. The belt of woodland to the south of the property borders Church Road and is passed by literally hundreds of people every day on foot, bus, cycle and car. A right of way between kissing gates runs along the eastern border.

The club is a community club and is open to all. Membership at both junior and senior level is strong. The standard of cricket played is high with the seniors playing in the only ECB accredited Premier League in Lancashire.

The first phase of the three year plan concentrated on clearing rubbish and invasive non native shrubs and trees.

Snowberry in particular was a huge problem. Apparently, it was introduced on to the site as pheasant cover when Squire Clifton owned the club land and organised shoots.

The British Trust for Conservation Volunteers (BTCV) were contacted and, along with other local organisations, volunteer help began to make a difference.

The old hedge was laid and interplanted. A completeley new hedge was planted along the border with the railway. This went partway to resolving the break in the wildlife corridor referred to earlier.

The next phase, which began in late autumn 2008, included further planting of native trees to strengthen the existing woodland and 'beef up' the hedgerow. A volunteering weekend took place on November 29th and 30th during national tree week. The National Tree Council provided some funding for this.

In front of the newly established hedgerow, near the railway, an area of native shrubs and wild flowers was created. This will link with the wild flower meadow on the north west boundary.

After less than twelve months, this meadow is already home to crickets, butterflies, shrews, voles, woodmice, frogs and moles. Kestrels hunt regularly.
To the west of this, we plan to have our butterfly garden. Butterflies have been recorded on the site for the past nine years by Grounds Chairman, Peter Harris. His records are passed annually to the Lancashire Branch of Butterfly Conservation.

"Because we have an intimate knowledge of the numbers and species which frequent the site, I asked Butterfly Conservation for a list of appropriate caterpillar food plants and plants which would provide nectar" said Peter. "I then got the BTCV to view the proposed site. It faces south and borders the railway line. It was described as perfect."

"They then priced up the plants and shrubs and a grant application was forwarded to Lancashire County Council Green Partnership. We started the work this winter."

The work being carried out by the BTCV includes identifying and clearing (strimming) small areas of low floral diversity, carrying out the necessary landscaping, spot spraying highly competitive perennial weeds such as docks with an approved glyphosate herbicide, and scarify the ground in preparation for planting. 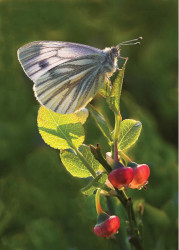 "Our three year plan should be completed by winter 2010" said Peter. "No doubt we will then find other challenges. We are keen to introduce bat boxes and nesting boxes and will follow a similar procedure as that for the butterfly garden."

"It has been important to engage with the local community and other local and national organisations. By illustrating a wide range of support for our project, we have been able to attract grant funding. It has been most gratifying to see the change take shape. I always warned people that it would look worse before it got better. I hope next spring sees the green shoots of transformation."

Clubs wishing to undertake a similar project may find the following websites useful:

RSPB - Royal Society for the Protection of Birds
www.rspb.org.uk