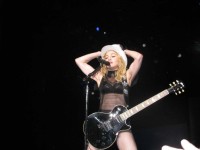 When we think of the old Eastern Bloc, we tend to imagine donkey carts and Trabants.

However different the work methods may be, the ability of companies such as Ontario Sport, based in Sofia, Bulgaria are on par with other world experts.

The President of Ontario Sport is Hristo Todorov who, as a young man, was one of Bulgaria's football greats. During the Communist era he was a pharmacist and, following the fall of the Communist regime, he was able to follow his passion and became a member of a scientific research team specialising in sportsfield construction. This was followed by work in Canada before returning to Bulgaria to start his own company.

Amongst the achievements accomplished by the company was the complete reconstruction of Bulgaria's Vassil Levski national stadium. The pitch benefits from full computer controlled irrigation, underground heating, the use of diffusion misers to supply top-level drainage and a deep rooted turf, giving a playing surface as good as any in the west.

The Vassil Levski Stadium is run by a Stadium Manager in combination with a representative of the Bulgarian Ministry of Sport. Ontario Sport are, however, still responsible for maintaining the playing surface.

This responsibility was tested to the limit when they were told, in mid August, that the stadium was to host a concert by Madonna on Saturday 29th August 2009, just seven days before a World Cup qualifying match between Bulgaria and Montenegro!

The preparations for the concert required the whole pitch to be covered in aluminium and the erection of a stage weighing hundreds of tons, as well as lighting towers on the playing surface.

It was an immediate concern that the pitch would not have sufficient time to recover before the scheduled World Cup qualifying match. Conventional plant fertilisers and stimulants would not be able to work within this very short time frame, and Ontario Sport looked to the open market for a solution. 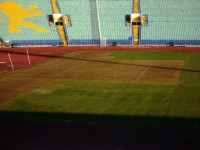 They contacted Massey Hiku EU, in Scotland, whose approach is to work from a perspective of soil science as opposed to conventional plant based technology. The remediation work involved was a tall order. However, given a well established plant, excellent growing temperatures and total irrigation control, it was felt that it may just be possible to stimulate root growth to an extent as to encourage sufficient surface growth to allow the world cup qualifying match to go ahead.

In a perfect world it would have been preferential to commence treatment prior to the pitch been covered but, as this wasn't possible, it was agreed between Massey Hiku and Ontario Sport that the remediation work would go ahead, but that no guarantee would be given. It was further agreed between the two companies that Harry Richmond-Watson would travel to Sofia to personally oversee the remediation works.

The soil is not only full of plant life, but also contains beneficial fungi and numerous soil microbes. These interact with the root system to allow the plant to draw from the reserves of both major nutrients and trace elements within the soil. The movement of microbes within the soil structure relieve compaction and introduce oxygen to the rootzone. 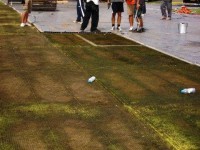 By using a combination of vermicompost tea, a fish meal based stimulant and a readily available phosphate source, it was felt that the root growth could be put into overdrive, thereby stimulating both the recovery of the existing leaf and new growth.

Bulgarian Airlines allowed the products to be carried as baggage and Harry arrived in Sofia at lunchtime on Sunday, the day after the concert. He was met at the airport by a representative from Ontario Sport and they both went to view the damage at the stadium.

As the aluminium covers were being removed, it became apparent that all was not well on the now exposed pitch. For some reason the irrigation had been allowed to run while the covers were in place. The result was that the leaf had been literally cooked, and the added moisture had resulted in the surface becoming corrugated under the aluminium covers. 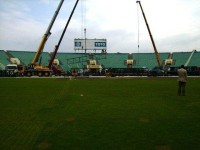 To add to this, it became apparent that the stage crew would need at least another twenty-four hours to expose the whole pitch. On the plus side, Ontario Sport did have a vertidrain, and a member of staff was immediately dispatched to the Black Sea coast to collect it!

The main difference between East and West is that here we are very dependant on machinery, whilst the Bulgarians are reliant on a large workforce of well trained professionals, and they immediately started raking the dead material from the pitch. Meanwhile, both Hristo and Harry were interviewed by national television.

Monday's newspapers were full of doom and gloom as they described the stadium as "smelling like a compost bin and looking totally dead". The last of the covers were removed by 6.30pm that evening and the first application of soil stimulants was applied. 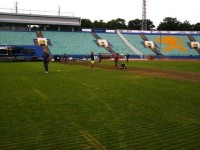 Tuesday saw the application of the tea to stimulate and introduce soil microbes and beneficial fungi. Meanwhile, the Bulgarian Prime Minister asked questions in parliament. By Wednesday, the pitch was starting to show new growth and, according to the press, the applied stimulants were a combination of wonder drugs, plant extracts and "witchcraft".

Meanwhile, the reality of the situation necessitated compromising between wanting to concentrate on stimulating root activity and the need to use a vibrating roller and an application of sand to level the pitch, which caused considerable compaction below the surface and added further stress to the plant. Although this was alleviated, to an extent, by using the vertidrain, it was far from ideal when looking to give the plant a stress free environment in which to recover within a very limited time frame.

Fresh growth was apparent across the whole pitch, which proved that the stimulation of the root system was working well. However, with an inspection by FIFA scheduled for Friday lunchtime, the time-line for the remediation package to work was reducing. 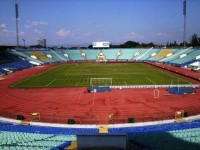 The importance of the forthcoming world cup qualifying match between Bulgaria and Montenegro was more than apparent from the television news and the national press. The main areas of the pitch were looking good. However, the combination of the pitch being irrigated whilst covered with daytime temperatures in excess of 30OC, and the colossal weight of both the stage and the lighting towers, resulted in these areas still being very discoloured.

The whole country knew how badly the stadium had been damaged, due to continual press and television coverage. Questions were being asked at the highest level. The damage was greater than anybody had anticipated. The recovery to the actual structure of the plant was well advanced, as indicated by the fresh growth across the whole pitch. However, the forthcoming match was still in question due to the cosmetic appearance of both the stage and lighting areas.

To overcome this, it was agreed that both these areas be treated with a cosmetic dye to enhance the appearance, and this was applied very early on the Friday morning. It is common practice, when televising important golf fixtures, to similarly dye areas that are not up to par. 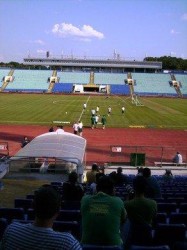 The pitch was approved by FIFA, and both Bulgaria and Montenegro were able to have a practice session on the Friday, and the world cup qualifying match went ahead, as scheduled, on Saturday with Bulgaria winning 4-1.

Talking to Harry Richmond-Watson, he admits that a great deal of the credit has to go to the team at Ontario Sport who, although looking from the perspective of the actual grass plant, had already included beneficial bacteria within their maintenance regime to stimulate a deep rooted plant.

The differing viewpoint of Massey Hiku is to concentrate on the soil structure. By providing a mix of the correct soil activity, it allows the plant to establish a greater root mass, supplies oxygen directly to the roots and converts nutrients that could otherwise be locked within the soil into a form that is usable by the plant.

Although the symbiotic relationship between plants and their environment have been used for centuries, recent decades have seen amenity managers, horticulturists and farmers concentrate on feeding the plant rather than the soil. However, the developments of technology have not been restricted solely to plant science, and it is now possible to provide a greater understanding of the environment in which we ask our plants to live.