Club Car have designs for life

Yet another reality TV show has hit the airwaves this week with the launch of ITV1's Design Wars. The show lets loose top international interior designers on 5 houses in one street in the Midlands for a 21 day televised makeover tournament! The show, presented by Mark Durden-Smith and Lorraine Kelly, airs daily on ITV1 and also runs on prime time twice weekly.

But why the interest? Well, the presenters are all equipped with their very own Club Car golf cars to zip around from house to house! Live television is one of the most demanding of all media disciplines and Talk Back, the show's production company, turned to Club Car in the knowledge that they could depend upon the efficient performance of their vehicles to keep the action running smoothly as the weeks progress.

The Club Car vehicles in use have been modified by JBL and are very similar to the new "Run-A-Bout" vehicle previewed at IOG Saltex earlier this month. The "Run-A-Bout" is the first road legal golf vehicle available direct from a manufacturer on the UK market.

The "Run-A-Bout" is an NEV - Neighbourhood Electric vehicle - based on Club Car's leading golf car the electric IQ. The cars were successfully tested in California and New York states via a joint venture with General Motors who supplied more than 10,000 cars to households. The "Run-A-Bout" is capable of travelling at up to 21 mph and has a range of up to 33 miles on a single overnight 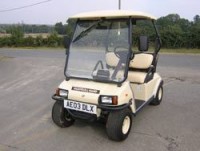 The car has all of the necessary features required for a road vehicle, including; 3 point seat belts, wheel brakes, indicators, headlights, windscreen wipers, horn and rear view mirror. Additional safety features such as a safety-glass windscreen and tip-over frame have been introduced to make sure the vehicle meets the stringent demands of the DVLA.

The car will be aimed at a wide range of customers, from local authorities looking to provide a low cost environmentally friendly park and ride vehicle, rental companies and to private individuals as personal transport or golfers who want to drive to their club, use the car on the golf course and drive home again!

The Run-A-Bout has been successfully introduced across the world with cars currently running in various exotic locations, including Hamilton Island in Australia, where road vehicles are not suitable modes of transport.

The 2003 Run-A-Bout will be available fully registered for delivery from December at £3,995 + VAT exc. delivery. In an age where environmental awareness is increasingly influential in business Club Car have made major progress and this additional exposure will do them - and the planet - no harm whatsoever!