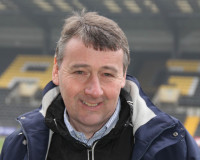 "Having dual usage on the pitch is not ideal, but I understand the reasons behind the decision"

As you head into Nottingham along the London Road, you are greeted by Trent Bridge Cricket Ground. A few hundred yards later and Nottingham Forest's City Ground comes into view and, as you cross the River Trent, Notts County's Meadow Lane is just half a mile further on. Welcome to the heart and soul of Nottingham sport.

Notts County are the world's oldest football league club, being formed in 1862. Having been FA Cup winners twice in the 1890s, plus a spell in the top flight in the 1990s, their recent history has been checkered to say the least, with the threat of administration, and of Middle East ownership, being serious concerns or opportunities, depending on your viewpoint, in recent years. This season sees them close to the relegation zone in npower League One, and with a new manager in former Manchester United and England midfielder, Paul Ince.

As has been well documented in this magazine, being a groundsman in the lower echelons of the Football League often brings its share of problems, with ageing machinery and tight budgets being par for the course. End of season renovations are usually carried out on a shoestring with the result that, as the following season progresses into winter, grass cover can be lost.

So, the last thing Greg Smith, the 'Magpies' Stadium Manager, needed was a dump of snow on the Meadow Lane pitch, last December, to exacerbate the problem. And, to further aggravate the pitch issues, the Notts County management took the decision, last year, to ground share with Nottingham RUFC.

Greg joined the Magpies in 2000, at the same time as a new fibresand pitch, primary drains (at 3m centres) and a pop-up irrigation system were being installed. Greg had previously spent fifteen years at the Boots the Chemists sportsground in the city, where he looked after cricket, bowls, tennis and winter sports pitches. He was, therefore, highly qualified for his new role.

He is assisted by Head Groundsman, Trevor Hutchinson, who has been at Meadow Lane for twenty-two years.

"Having dual usage on the pitch is not ideal," says Greg, "but, I understand the reasons behind the decision, as revenue is hugely important to the club. As the current agreement is for seven years, it is something we are going to have to get used to. Hopefully the additional revenue will mean that I can have an increased budget for my renovations."

To date (mid-March), Greg and Trevor have had to accommodate forty-four matches on the pitch. "The snow in December caused no end of problems," says Greg.

"Our main priority was to ensure that games went ahead. Before the game against the MK Dons, and with snow forecast, we decided to leave the frost covers off, as we felt it would be easier to get the snow off the pitch. Over 150mm (6") was dumped on the pitch, and it took eight people two days to hand shovel it off, piling the snow into trailers to be taken away." Their hard work was rewarded though, when the fixture went ahead and the Magpies won the game.

"However, a lot of grass cover was lost during the clearing," says Greg, "which was further compounded by a period of very cold weather, with temperatures as low as minus 19OC. So, there was little or no growth and, therefore, no chance for the grass to recover, especially with the ongoing fixture programme. It's hardly surprising the pitch looks poor compared to some other pitches in our division."

"There have been times when we have had a football match on Saturday, a rugby match on Sunday and a second XI game on Tuesday. The grass doesn't stand a chance in those circumstances. All we can do between games is replace divots, perhaps put a bit of topdressing down to restore levels, mark out and mow."

"We do not have undersoil heating, although plans are in the pipeline (excuse the pun) to put in a gas powered system in the future. Neither do we have the luxury of lighting rigs, although we did trial some last year and I was very impressed with their performance. The only protection we can give the pitch is with forty Tildenet frost sheets, but they only work down to about minus 4OC."

"Trevor and I have got the football/rugby change over down to a fine art though. We can now take down one set of posts, erect another set and re-mark in less then two hours."

As well as looking after the stadium pitch Greg and Trevor have, more recently, helped develop and maintain Notts County's new training facility just down the road opposite Nottingham University. The land belongs to the local council who have leased it back to the club.

"We have inherited four very flat and level soil based pitches, and I want to continue to improve them. With that in mind, we have taken on an apprentice, Jamie Mudie, to work solely at the training ground. I am really pleased with his progress. He has an old head on young shoulders,

does not wait to be told what to do, uses his own initiative and is keen to improve his knowledge. He's currently studying for an NVQ in sports turf management, such is his enthusiasm for the job."

Ongoing maintenance is fairly typical. Aeration is undertaken monthly, using a SISIS fitted with solid tines, to keep the pitch free draining. Headland products are used for feeding - every four to six weeks - usually Greentec 6:5:18+Mg+04Fe NPK, with some liquid iron applied, as and when needed, to maintain colour.

The pitch is marked out using a spray jet impact linemarker - both football and rugby lines are painted in white.

Mowing is done on a daily basis throughout the growing season, maintaining a height of cut around 28mm to provide a safe and quick surface for both rugby and football. "The rugby lads have now got used to playing on a flatter, quicker surface, and they reckon it helps the speed of play," says Greg.

Available budgets dictate the amount of work that can be achieved in terms of maintenance and, more importantly, end of season renovations. In recent years, the club have had to watch their spending so, for the last three years, the club has only been able to fraise mow the top 15mm, re-level, topdress with 30 tonnes and overseed with MM60. The work is carried out by Fineturf. "I've used them for a number of years now and am very happy with the results. I like to build good relationships with all my suppliers, and do not simply go on the cheapest price."

End of season work at the training ground is centred around scarification, topdressing with thirty tonnes of rootzone per pitch, and overseeding with MM60 grass seed. The pitches are mown with the Toro 6500-D set at 28mm.

"I consider myself very lucky to be working here. Sure, it can be stressful at times, and I do get some flack about the current state of the pitch. But, the management understand the reasons for it and, together, I think we will see improvements next year, especially if the snow and freezing temperatures stay away. Sometimes, you just cannot compete with Mother Nature!"

In his eleven years with the club, Greg has seen fifteen managers come and go. "They all have their own ways of working and special requirements, but I always make a point of getting to know them and ensure I build up a good working relationship."

With Forest's Ewan Hunter and Steve Birks at Trent Bridge 'just over the road', the three of them often call on each other for advice, sympathy or to borrow a bit of kit. And, next to the training ground, Greg can pop in and see David Lawrence, the Head Groundsman at the Nottingham Tennis Centre. He is definitely not alone when it comes to managing high level sports facilities in the city of Nottingham.