0 Maintaining bunkers for playability, not perfection

By definition, bunkers are hazards on a golf course. Despite this fact, many superintendents are expected to maintain pristine playing conditions in bunkers. Not only does this detract from the original intent of bunkers - to penalise a player for hitting an errant shot - it diverts resources away from higher-priority playing areas like putting greens and fairways. 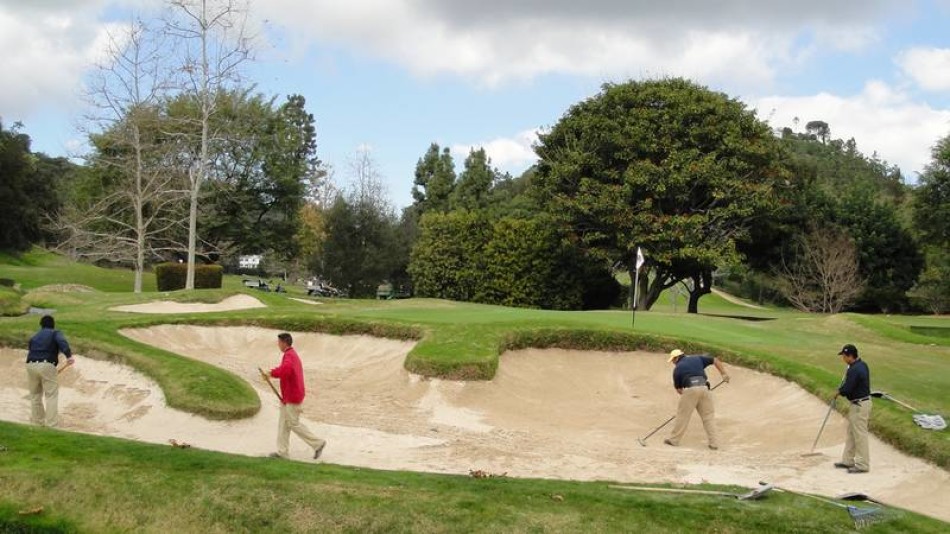 Many of the frequently performed bunker maintenance tasks such as hand raking, repairing washouts, removing debris, adjusting sand depth and trimming edges are labour-intensive and costly. Altering expectations about how bunkers are to be maintained can help a golf course achieve the same level of playability with fewer resources. Here are a few examples:

- Reducing raking frequency - By only raking areas where sand has been disturbed, instead of completely raking all bunkers every day, superintendents can focus their limited staff and budgets on areas that have a greater impact on the game - like putting greens.

- Using mechanical rakes - Mechanical bunker rakes can condition bunkers much faster than hand raking, allowing one employee to do the job of several. Not only does this reduce labour expense, it could allow bunker maintenance to be completed well in advance of play. Also, depending on how many bunkers a course has, the time savings and reduced labour requirement realised by replacing hand raking with mechanical raking could quickly cover the cost of purchasing a mechanical bunker rake.

- Implementing the "Aussie method" - This method involves minimising disturbance of bunker faces and only raking the bottom of bunkers. Some courses also occasionally smooth bunker faces with a paint roller, squeegee or the smooth side of a bunker rake. This method reduces the amount of raking time, creates firmer bunker faces, reduces the likelihood of buried lies, and encourages golf balls to roll into the bottom of a bunker.

Maintaining consistent and uniform bunkers is unrealistic because golf is an outdoor game with inherent variability. Expecting these conditions will either raise maintenance costs, divert resources from higher-priority playing areas or both. Maintenance teams work hard to provide the best possible playing conditions within their budgets. Most facilities will be better served by focusing their resources on priority areas like putting greens, tees and fairways instead of attempting to provide perfect hazards.

You can read the original USGA article HERE