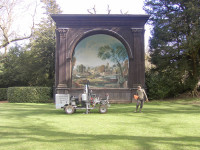 Majestic oaks at a natural amphitheatre will continue to set the scene for music festivals this summer, following deep, compressed air de-compaction treatment in early spring.

Larmer Tree Gardens on the Dorset/Wiltshire border, between Salisbury, Blandford and Shaftsbury is an event venue, entertaining 4,000 to 5,000 music lovers over 5 days twice a year during summer, and hosting wedding parties most weekends. As part of the Rushmore estate, one of the first privately owned estates to open to the public, the gardens date back to Victorian times, and according to Head Gardener Andy Rampton photographs dating from the 18 80s show that the present trees were mature at that time. "Nobody's quite sure how old they are but they were big trees even then," he says. "Our oaks are very important and we don't want to lose them."

Terrain Aeration, who had treated the trees in 2001, returned with their Airforce terralift machine and worked at two metre spacings one metre outside the canopy and one metre inside, inserting the probe one metre below the surface and injecting air under pressure to create fractures and fissures within the root zone. On the final air blast the company injected dried, milled seaweed, which swells when wet and will keep the new air channels open. Groundsman Ian Clement back filled the probe holes with lytag. 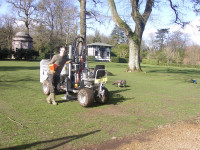 "We're on thin clay over chalk and we occasionally get water-logging in winter," continues Rampton. "We asked Terrain Aeration to treat specific turf areas that suffer heavy traffic, the main entrance area, along the paths and in front of the backdrop that we use for weddings, for instance." Steve Oates, working for Terrain Aeration remembers that it had rained heavily the night before. "Conditions were quite wet and slippery," he recalls "and we had to put the boards down to protect the turf." Andy Rampton is happy with the result. "Steve Oates worked very quickly despite the conditions" he says. "We had some areas of standing water but they've disappeared now."

As this method of deep, compressed air de-compaction lasts around five to six years, Terrain Aeration expect to return to Larmer Tree Gardens in 2013.

For further information on Terrain Aeration contact the company on Tel: 01449 673783, or visit their website at www.terrainaeration.co.uk