From reading various posts on turf management message boards and hearing some groundsmen's opinions, although not necessarily the opinions of the industry as a whole, it seems artificial sports surfaces have accrued an unpopular reputation. 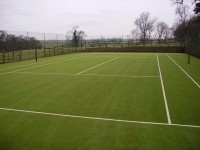 These views, however, are usually from diehard "old school" groundsmen who see them as the arch nemesis of natural turf. A view borne from either the notion that such a surface will not require their services and, therefore, render them redundant; or the simple fact that they do not want to admit that they don't know how to maintain them.

My own experience in sports turf stems from a golf course background, and I freely admit I didn't know what was required to maintain an artificial surface. Like many others I thought they required minimal maintenance inputs.

Several years ago I found myself sharing a portakabin for three years at Cranfield University with Dr Andy McLeod, who was conducting research into the maintenance of artificial sports surfaces. It was from here, through various discussions, that I developed a greater appreciation for artificials and their nuances; either that or I was the innocent victim of an indoctrination process!!

Nevertheless, however it came about; I left the ranks of the non-believers and became completely open minded about artificial surfaces. I say "surfaces" plural, as there are a range of surfaces to meet the different needs of sport, with surfaces such as acrylic, tufted (both sand filled and rubber crumb filled), woven, asphalt, and water based. The one thing that they have in common with natural turf surfaces is that they require good and regular maintenance to maintain good playing characteristics. 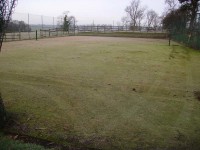 Joining Sweepfast has given me the opportunity to learn the skill set required to produce a top quality playing surface, and has further opened my eyes to the different methods, machinery and techniques available for every situation.

Typical problems encountered are very similar to those experienced on natural turf areas, namely poor drainage, moss infestations, compaction (of the infill), surface debris - primarily leaf litter which leads to contamination of the infill - and sunken or raised areas due to tree roots crossing beneath the surface. Other problems include seam failure, worn areas, and capping of the surface where carpet fibres have bent over and, after a prolonged period, literally become welded together.

In general the company is called in for annual maintenance or where a surface has been poorly maintained and has got to the point where it requires specialist treatment.

Some surfaces encountered are so bad, due to neglect or ignorance, that you can't actually see the playing surface. It never ceases to amaze me that what looks like a basket case, can be transformed into a first class playing surface, with playing characteristics as good as natural turf. As the nature of this kind of work is very specialist the company travels far and wide, up, down, and across the country, literally to all points of the compass, both in the UK and overseas.

I have also been surprised at the broad spectrum of the company's client base, ranging from a privately owned tennis court in someone's back garden, through to Premier League training facilities.

Artificial surfaces are usually constructed for year round play, and can be located in areas where they receive lots of wear, which a natural turf surface could not sustain, such as a local authority pitch in a built up area. And, when I say a built up area, they can be exactly that, built up, to the point where we have to employ a crane to be able to access the pitch with the machinery.

In cases like this, it is not viewed as a problem, but as a challenge. As with any playing surface, natural or artificial, the timing and speed at which the maintenance operations are carried out are very important, as the surfaces are usually fully booked up, whether they are a local authority pitch, private tennis club or school.

There are lots of pros and cons in the natural verses artificial debate, and that is a discussion that could go on and on. Which one provides the best playing surface, I could not say, as it depends on more than the skill of the groundsman. The finished surfaces are dependant on the initial performance characteristics specified for them, the design and build quality, the budget allocated for their maintenance, the environment in which they will be located, and how much wear they will be subjected to.

What is apparent is that no two surfaces are the same, and the nature of the problems encountered is dependant on the type of surface and the maintenance it has or hasn't received. Research into the optimum construction method and the ideal maintenance regime is ongoing for both natural turf and artificial surfaces.

The development of new technologies for the maintenance of artificials is where I step in at Sweepfast but, due to commercial sensitivity, I can't explain the new technology we are developing, but watch this space!