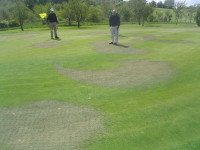 2008 will be remembered for accidental and malicious damage to golf courses throughout the UK.

Calibration is often seen as a potential problem when the decimal point is incorrectly placed. Some Head Greenkeepers have lost their job as a result. There is an old adage of a bit more will do. Unfortunately, this concept will lead to disastrous consequences, not only for the turf, but for greenkeepers. Chemical companies are not at fault. Their research, developed material and the rate of application must be adhered to.

One example of such malicious damage is that of Spa Golf Club, County Down, Northern Ireland. Located 11 miles from Belfast, this parkland woodland course has panoramic views. On the 19th February, 3 greens were attacked, followed some 4 weeks later by a further 3 greens.

"Remedial action was taken immediately after each attack. Mechanical operations in terms of hollow tining, flushing out, top dressing and overseeding were part of this action" stated Terry MaGee, General Manager at Spa. 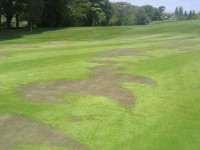 The recovery programme could not be completed until the soil samples were analysed to determine the type of contamination used and the extent to which it had penetrated the root zone. With the attacks being 4 weeks apart the Club's management had to wait for the soil analysis of the second attack to ensure that the recovery programme being implemented would suit all 6 damaged greens.

Initial reports suggested that the contaminant was a product called Bluestone used in agriculture to burn off potato waste, i.e. top growth prior to harvest. 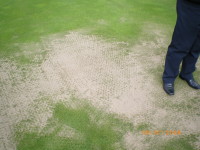 mists and Turfcare Ireland, Horth Soil and Crawford Advisory Services to establish the most effective way ahead.

The greens were sprayed with chemicals to try to neutralise the contamination within the sward and that of the root zone. Needle tining, top dressing and overseeding continued during late March and into April. Progress was severely hampered by a very cold and wet April. The soil temperature was too low to allow the grass seed to germinate. By late April / early May recovery was minimal with some growth appearing in the aeration tine holes, but no tillering effect was evident across the surface.

The top 25mm or so of the green resembled that of a felt carpet and Spa was advised that all the greens would and should undergo reconstruction and relaying in October 2008, with costs in the region of £60,000. However, the Club was not prepared to accept this devastating advice as their only way forward, particularly with 5 months of growing weather ahead of them, and continued to wash out the greens which provided slight improvements. 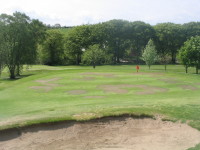 Terry stated, "We could not afford this cost and, furthermore, we would lose the greens for some period of time were they to undergo reconstruction."

Spa was subsequently advised by Niall McKibbin, Head Green Keeper at Ramsey Golf Club, Isle of Man, to contact David H. Bates Agronomy Services based in the Midlands in the UK. Niall had received excellent advice and results from the new scienced programmed David had developed for the ongoing Earth-Tec Ltd. Niall recommended David to Terry who took action by sending photos of the damage to David along with the reports. As a result, David visited Spa in early June.

David states, "On seeing the photos and due to my experience in remediation programmes, it was evident that the greens were more than capable of full recovery without undue reconstruction. In fact, I stated that, by following a set programme and dedication on behalf of the management, at least 75% of all the greens would be fully recovered by October 2008. There was no need to stop golfers using the grass while this management was undertaken. Yes it is true the surface would not play great, but they would be playable." 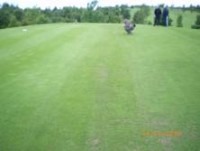 In conjunction with the Club, a recovery programme was developed. The 8th green in particular was severely damaged. This was a short par 3 sitting basin structure with poor drainage and warranted most concern due to the retention of the toxin.

David discussed a kick start programme of aeration, Graden scarification and weekly applications of 6 ingredients including "Revolution" wetting agents to the damaged greens, followed by irrigation. The surface was not allowed to dry out. As it happened, Mother Nature saw to that.

During weeks 2, 3 and 4 the ratios were greatly reduced. Every month the greens were visited by David and the programme adjusted in terms of rate of application as appropriate.

It was vitally important that throughout the programme of remediation that NO salt based fertilisers would be applied, only the materials used under David's recommendations and programme.

David stated, "It was vitally important not to add to the problem by adding more synthetic fertilisers. The intention was to remediate the turf and soil by bringing them back into a balanced environment in which recovery would be possible. Micro organism activity had to be recaptured. Healthy soil gives healthy plants."

Although the programme was expensive, about £10,000 all in, it was much cheaper than having to lift and relay all the damaged greens at £60,000. Over June, July and August the labour intensive programme in conjunction with the application of the Earth-Tec products was carried out and the recovery of the grass sward was excellent.


In fact, Terry confirmed that by the end of September 3 of the greens were 99% back to full health, whilst the other greens were about 95%.

Terry MaGee, who had instigated David's and Earth-Tec's services, was so pleased with the results that under his guidance he applied the some products to unaffected greens and observed the same positive effects. As a result, he has retained David H. Bates Agronomy Services for 2009 and will be extending the use of the Earth-Tec products to all 18 greens, including the putting green for the next few years in conjunction with in house mechanical operations and maintenance programmes.

Terry stated, "I would like to thank David, Jimmy Kelly, Royal County Down and Ardglass Golf Club for their assistance during the recovery programme. Congratulations are also due to Niall McKibbin and David Wade, along with our own green staff in carrying out the additional work required to make the full recovery a success."

All you need is knowledge, understanding, patience and devotion and anything is possible. And of course Mother Nature, although 2008 was not good in weather and growth! The results speak for themselves.

For details on the actual kick start programme and the full remediation plan, contact David H. Bates Agronomy Services on 07736 066031 or email at DHBatesservices@aol.com