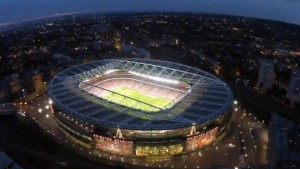 Wilson, from Bingham, Nottinghamshire, was originally accused of 17 breaches of the Air Navigation Order but some charges were dropped due to insufficient evidence.

He was fined £1,800 at Westminster Magistrates' Court.

It was the first case in England of a person being prosecuted by the Crown Prosecution Service for using drones after a police-led operation.
Wilson, 42, was accused by Scotland Yard of flying the aircraft unmanned and "failing to maintain direct visual contact".

The charges he admitted included flying the drone on:

The court heard police horses were startled by Wilson's device as it flew over a Champions League group stage game between Liverpool and Bulgarian visitors Ludogorets at Anfield.

He was also twice arrested in London and had his drones confiscated.