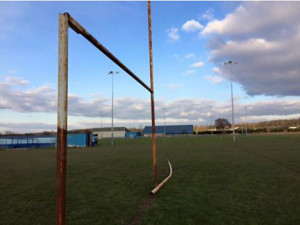 A father watching his son play rugby suffered head injuries when a post fell on his head.

The man was struck by an upright section of the one of the posts, which narrowly missed a group of people, according to spectators at Shrewsbury Rugby Club.

He had been watching his son play for visiting side Oswestry Rugby Club on Sunday and was taken to hospital by ambulance. His condition is not known.

Club chairman Giles Alton said he had spoken by telephone to the man's wife at the hospital and wished him a speedy recovery. Mr Alton was set to speak to the Rugby Football Union and health and safety officials.

Games have been suspended until all the posts have been examined, he added.

The image shows the broken goal post. The upright, which hit the spectator, can be seen lying on the ground. The man is in Royal Shrewsbury Hospital with serious head injuries