A man-made turf system available in the UK and Eire through SIS (Support in Sport) Ltd, the specialist designers and installers of sports pitches, has just achieved UEFA approval recognising its astonishing ability to replicate the standards of the highest-quality natural grass pitches.

One of only two products that has been successfully tested by UEFA, SIS believe that the system, called United, will now become the first choice for any club seeking a durable, multi-use surface that still allows players to perform at the highest level.

United, developed by the synthetic turf specialists Greenfields of The Netherlands, met UEFA's stringent criteria under laboratory conditions to show it offered the same characteristics as grass, in terms of ball bounce and ball roll, shock absorption and low friction. 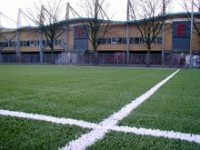 The product is made from polypropylene and nylon with a patented shock pad system. The fibres are designed to absorb water, in conjunction with a carefully developed infill, and this allows players to make sliding tackles without risk of friction burns. It is also resilient enough to accept normal studded football boots.

UEFA has long shown interest in synthetic turf as a means of ensuring that conditions for all teams are equal, with no home advantage. As part of a trial project, matches will be played on United surfaces installed at five stadia, at the grounds of Austria Salzburg (Austria), Torpedo Moscow (Russian Federation), Őrebro SK (Sweden), Denizlispor (Turkey) and Heracles Almedo (The Netherlands).

Greenfields, who have more than 20 years' experience of synthetic turf development, have chosen SIS as their UK and Eire distributors, owing to SIS' design and installation expertise, already proven at countless sites throughout Europe.

George Mullan, Chief Executive Officer of SIS, is understandably delighted by United's accreditation, which he believes puts it at the forefront of modern stadium development. "This is an incredibly exciting breakthrough. For many years, designers have sought a means of producing optimum pitch conditions that are unaffected by rainfall, shadows caused by modern, high stands, and other factors. They can now choose a UEFA-approved system that gives the best of all worlds, in terms of multi-use revenue opportunities without any compromise on playing quality. In fact, some experts believe that today's new-generation synthetics can offer better, more consistent conditions for soccer."

George Mullan confirms that interest in man-made pitch solutions is "rocketing, and United's accreditation could not be better timed." SIS are installing no less than 12 synthetic pitches at various sites this summer, two of which are in London.