by Football Foundation
in Football, Synthetics, and General Interest
on 27 Dec 2018

Burton Albion FC manager, Nigel Clough, and England Under-20 boss Paul Simpson teamed up to open a new third generation (3G) artificial grass pitch (AGP) at The Pingle Academy recently. Their new facility was made possible thanks to investment from the Premier League & The FA Facilities Fund, delivered by the Football Foundation. 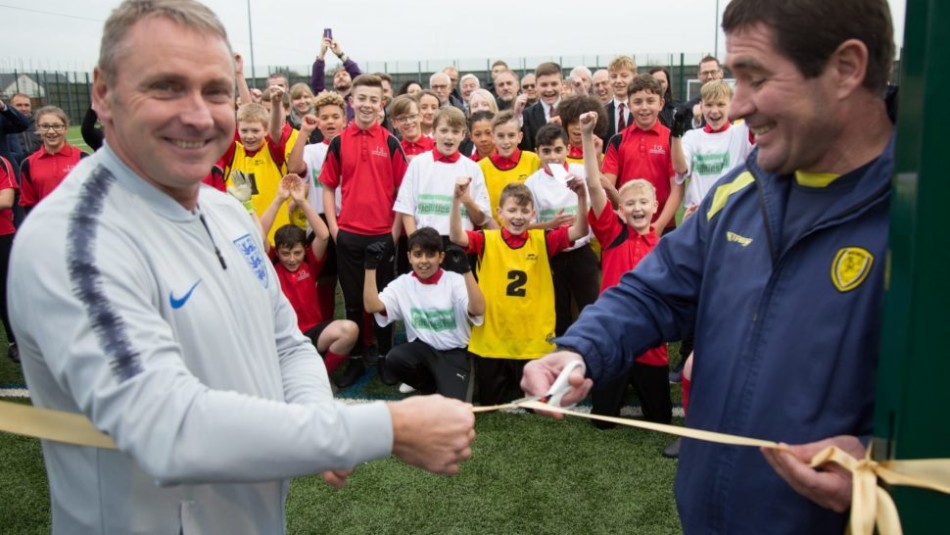 The grant has enabled The Pingle Academy to replace their existing all-weather pitch, which was originally installed in 2005 and had reached the end of its operational life due to heavy usage. The new pitch has been installed with an improved drainage system, refurbished floodlights and replacement boundary fencing to bring the facility up to current guidelines.

Sitting alongside the school's grass football and rugby pitches, the upgraded 3G AGP will not only benefit students at the school, but also many partner organisations, such as Woodville Rangers FC, Gresley in The Community, Derby County Community Trust, Burton Albion Community Trust and Burton Junior Football League. Thanks to the pitch becoming a central venue for the League, it is expected that 25 new teams will use the site.

The Pingle Academy were awarded a £239,934 grant from the Premier League & The FA Facilities Fund towards the project. Working alongside the Football Foundation, South Derbyshire District Council and Derbyshire FA to compile a five-year Football Development Plan, which is a vision of how sport will be played on site with an emphasis on increasing participation.

The new surface is set to support the formation of several affiliated football teams over the next five years, growing from 48 to 73 teams using the facility. This will contribute to nearly 350 additional people playing football at the site, which represents a 41% growth.

Since 2000, the Football Foundation Funding Partners' investment has provided 241 grants worth £9.1m towards grassroots sports projects worth over £17.7m across the whole of Derbyshire FA's region.

For the original article visit www.footballfoundation.org.uk