Does topdressing with abrasive aggregates discourage earthworms over the long term? 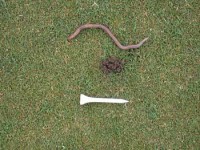 In the spring of 2002 University of Wisconsin-Madison scientists initiated a comprehensive study to investigate the effectiveness of abrasive aggregates for potential suppression of earthworm casting production in low-cut golf course turf when applied as a topdressing amendment.

Earthworms are abundant, well-known inhabitants of the soil, belonging to the order Oligochaeta, they are often referred to by a variety of names such as angleworms, fish worms, night crawlers and dew worms. They are widely considered beneficial organisms due to certain favorable attributes such as soil formation, aeration and drainage, organic matter breakdown and incorporation, and even enhancement of microbial activity (Edwards 2004).

It is estimated that there are as many as 8000 species from about 800 genera worldwide (Edwards 2004). They live in diverse locations, ranging from forests to lakes and streams, as well as grasslands, agroecosystems, including turfgrass (Lee 1985, Kirby and Baker 1995, Edwards 2004). Earthworms are found in many regions of the world occurring in a wide variety of soil types, though they tend to be relatively scarce in primarily sandy soils.
Earthworms have two primary requirements: moist soil and an organic-matter food source, both of which are commonly plentiful on golf courses. In North America, it is estimated that there are 24 species of earthworms, however only three have been reported in turfgrass.

Despite the aforementioned beneficial attributes of earthworms, they can be problematic due to the earthen casts that they produce on golf course turf, particularly in shaded, well-irrigated sites (Backman et al. 2001, Potter 1998, Beard 1973). Of the three earthworm species found in turf, only two species create soil castings.

The night crawler, Lumbricus terrestris Linnaeus, is the most common and abundant species of the two that construct earthen castings. Earthworm casts are most common on low-cut turf including putting greens, approaches and collars, tee boxes, and fairways (Potter 1998) (Figure 1 Picture on right) Earthworm casts disrupt the uniformity, appearance, and playability of affected areas (Beard 1973). 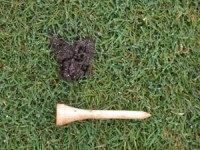 Soft wet castings are readily squashed flat by early morning mowing operations, and closely mowed turf beneath the leveled casting is smothered. As a result, appearance and playability are negatively impacted in areas of the course where earthworm populations are dense. Furthermore, such impacted turf areas often experience turf damage or loss due to the inability of the plants to properly photosynthesize (Kirby and Baker 1995). Moreover, mechanical damage to mowing equipment including bed knives and reels may occur.

Because earthworms are considered beneficial organisms, no pesticides are registered or labeled for their control, and any pesticide application specifically intended to control earthworms is illegal in the United States. Therefore, alternative, nonchemical earthworm management strategies are needed.

Earthworms migrate up and down through the soil profile in response to changes in soil moisture content and soil temperature. Because the cuticle (skin) of earthworms is quite sensitive, sand and other abrasive substances likely irritate and repel them. This research was aimed at exploiting this weakness.

A three-year study was initiated in 2002 on two golf course fairways at Blackhawk Country Club (Madison, Wis.) where earthworms were problematic. The fairway was comprised of a mixture of creeping bentgrass (Agrostis palustris) and annual bluegrass (Poa annua) maintained at approximately 7/16 inch (11 millimeters). Respective treatments were applied to 10 x 10 feet plots (i.e., 100 ft2) in a randomized design with four replications per treatment. 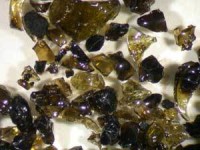 Black Jack, a byproduct of the coal industry, is composed of the remains of coal after it is burned for production of electricity. Once the coal is burned, the resulting 1-2 inch (2.5-5-centimeter) colloids are crushed, fractionated into respective size ranges, demagnetized and kiln-dried. Black Jack is essentially inert, extremely hard, highly angular and predominantly black in color. Amber Jack, a byproduct of the paper mill industry, is comparable to Black Jack. It, too, is inert, highly angular and extremely hard, but it is considerably lighter in color, ranging from almost clear to reddish amber. Respective treatments and regimes for 2002 and 2003-2004 are as follows: 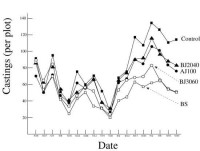 Figure 5. The results of timing study for abrasive applications were variable, however, due to the abrasives' dispersion or its
incorporation into the soil, it is recommended that abrasives be applied both spring and fall to maintain suppression of earthworm
castings.

Respective turf plots were evaluated for the mean number of castings every seven days during the growing season (i.e. April - November). The fungicide and insecticide treatments dramatically reduced earthworm castings to an acceptable level. The soil amendments (i.e., Black Jack and Zeolite) reduced earthworm castings to levels comparable to pesticide applications. All other treatments had relatively little effect on earthworm activity (Figure 5).

The effects of spring versus fall applications and a combination of spring and fall application of abrasive topdressing aggregates were evaluated in the 2003 growing season (April - November). Turf quality, thatch accumulation and disease activity were also rated throughout the 2003 season to document any possible adverse effects that a thin layer of abrasive material might have in the upper root zone of intensively managed golf course turf.

When data collection resumed in April 2003, it was revealed that the effectiveness of the Black Jack treatment applied in spring 2002 (more than 12 months earlier) had decreased measurably. We hypothesized that the aggregate's effectiveness had decreased because of its dispersion or its incorporation into the soil.

Similarly, after almost four months, the effectiveness of the spring 2003 application of Amber Jack, Black Jack and Best Sand also began to decrease. These results further support the idea that the aggregates eventually disperse into the soil, thus lose their effectiveness over time.

As a result, additional applications of the aggregates may be necessary to maximize their effectiveness.
When angular soil aggregates such as Amber Jack, Best Sand or Black Jack were applied in both spring and fall (combination), sustained suppression of earthworm castings occurred. No measurable differences the aforementioned aggregates occurred, or did particle size did have any meaningful effect.

The results in 2004 were similar to 2003. The fungicide treatments provided the greatest reduction in earthworm casting production compared to all other treatments, regardless of spray volume (1 or 2 gallons of water/M) (Figure 7) [Figure7]. All of the soil aggregates tested provided measurably better suppression of earthworm castings compared to the untreated control (Table 1).

The combination spring and fall application exhibited sustained suppression of earthworm castings compared to the spring only or fall only treatment application, regardless of treatment or particle size. As previously mentioned, the residual activity (effectiveness) of single season applications of soil aggregates appear to decline over time.

Thus, multiple treatment applications may be necessary. Since earthworm activity is most pronounced in the spring and again in the fall when ambient and soil temperatures are typically lower and soil moisture is greater, spring and fall topdressing applications of highly angular, abrasive aggregates may reduce earthworm populations to tolerable levels.

Potential for use of abrasive, angular aggregates for suppression of earthworm casts

The results of this study suggest that abrasive, angular aggregates such as Amber Jack, Best Sand and Black Jack may provide an alternative, legal, non-pesticidal management strategy for reducing earthworm castings to tolerable levels on low-cut golf course turf. However, because the potential negative, long-term attributes of abrasive, highly-angular soil aggregates are not understood, careful forethought and consideration should be administered before completely adopting this novel management strategy. When considering the use of such amendments, begin by treating only small areas of turf where earthworms are highly problematic to evaluate this management strategy before adopting for widespread use.

What is the significance of this research to superintendents, and why is further research needed? Compare the following scenarios.

Several approach areas to putting greens are plagued by earthworm castings every season. The superintendent makes an application of abrasive topdressing to these sites, and the worms are irritated to the point where they migrate to the adjacent roughs. The castings in the roughs are not a problem in the 2 1/2-inch (6.4-centimeter) turf. In addition, the topdressing firms up the approach areas, and golfers can now play a bump-and-run shot to the green. Result: life is good.

The superintendent makes the same application of sharp topdressing material to approaches. Worms go away, but the layer begins to abrade and injure turf roots and shoots in response to the compaction caused by mowers, golf cars and concentrated foot traffic. Roots die back, diseases run rampant and the turf wilts constantly. Result: life is not good, and you realize that it is very easy to add a foreign material to the root zone and very difficult to remove it.

I want to thank the United States Golf Association as well as the Wisconsin Turfgrass Association for providing funding of this project. I thank Bob Vavrek (USGA Regional Agronomist) for his editorial and intellectual contributions. I would also like to thank 31-year GCSAA member Monroe S. Miller, golf course superintendent at Blackhawk Country Club, Madison, Wis., for his cooperation and for providing the study site.


R. Chris Williamson, Ph.D. (rcwillie@entomology.wisc.edu), is an assistant professor and turfgrass and ornamental entomologist in the department of entomology at the University of Wisconsin-Madison.