The appearance of chlorotic patches is often the first indication that plant parasitic nematode feeding is causing significant damage to turfgrass. 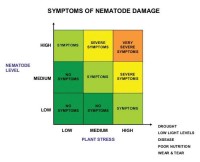 A common feature of nematode damage is that symptoms will first appear when grasses are experiencing some degree of stress. Stress can be caused by a variety of biotic or abiotic factors including reduced nutrition, drought, low light levels or disease (Figure 1).

Laboratory analysis of soil samples can provide confirmation that nematode damage is the cause of a turf problem. Laboratory reports will usually describe the types and numbers of nematodes present in both the turfgrass roots and in the rootzone. However, greenkeepers or groundsmen are sometimes puzzled why high numbers of nematodes in one area result in virtually no damage, while an area containing apparently fewer nematodes may show severe symptoms.

This is demonstrated in Figure 2 which shows the range of symptoms observed in creeping bentgrass golf greens containing different population levels of the root knot nematode Meloidogyne minor. Greens parasitised by similar levels of M. minor may show symptoms ranging from normal healthy turf right through to turf loss. The cause of this variation in symptoms response is environmental stress.

he severity of turfgrass symptoms will depend on the nematode species present, the nematode population sizes and, equally importantly, stress levels. Grass is adapted to coping with plant parasitic nematode feeding and, given favourable growing conditions, a significant level of nematode attack is required before observable damage appears in the plants. However, if plants are subjected to other stresses (e.g. high salinity, shade, high temperatures, drought) then the nematode population threshold above which damage is apparent will be considerably lower.

So, once a nematode problem is diagnosed, what can be done? Given what we know about the interaction between nematode population levels and stress, reducing both plant stress and nematode numbers should help the situation.

By its very nature, turfgrass is often subjected to significant levels of environmental stress. Very simple techniques can be used to alleviate this pressure, one of which is raising cutting heights. Increasing the amount of photosynthetic tissue in a golf green can quickly allow plants to recover from the effects of nematode feeding, though the demands of golfers for faster and faster playing surfaces often preclude this as a regular management option.

The use of biostimulants on turf seems to offer a more practical solution to stress reduction in high traffic situations. Effective biostimulants include humic acid and seaweed extracts, and recent research results indicate some of the possible reasons why these materials can help turf growth and condition in the presence of biotic and abiotic stress.

Extracts of the brown seaweed Ascophyllum nodosum seem particularly effective in reducing nematode stress and it has now been shown that, following their application to plants, numerous plant genes are affected, including many of those involved in coping with environmental stress.

Our work in Belfast indicates that routine use of seaweed extracts or other biostimulants can significantly reduce nematode damage symptoms in virtually all turf types (Figure 3). 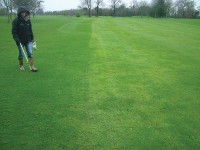 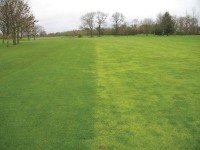 Recurring environmental problems have resulted in the loss of many fumigant and non-fumigant nematicides to both agriculture and the amenity industry. This means that traditional pesticide-based control of plant parasitic nematodes is rarely an option and turf managers must look elsewhere for a solution to high nematode levels in their pitches and greens.

A number of organic soil amendments have proven useful in suppressing nematode populations in turfgrass rootzones:

Mustard brans and liquids: Brassicas, such as mustard, contain natural chemicals which break down under enzymatic action to release gases that can suppress plant parasitic nematodes in most soil types.

Furfural: This organic chemical, a by-product of sugar production, interacts with the nematode cuticle affecting the pest's ability to move and feed. Used at the appropriate times it can effectively suppress plant parasitic nematode populations.

All of these materials can be effective in reducing the numbers of nematodes in the rootzone, however, their action is not systemic and nematodes inside roots are largely unaffected. This means that in the case of endoparasitic nematodes such as root knot nematodes, cyst nematodes or lesion nematodes, applications must coincide with those times when juveniles or adults are present in the rootzone.

Following is a case study from Shawsbridge Sports Association in Belfast. It looks at the problems caused by root knot nematodes, maintenance regimes and future plans. 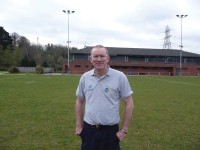 At Shawsbridge there are four rugby pitches, two sand-based and two soil-based. Three of the rugby pitches make up the outfields for cricket wickets in the summer months.

• There are high numbers of problem nematodes on all playing surfaces. In particular, high levels of the root knot nematodes Meloidogyne minor and Meloidogyne naasi are seriously affecting ryegrass rooting and turf density in the sand-based pitches.

• One of the major management problems is overplay. Two of the rugby fields (one sand-based and one soil-based) have floodlights for night-time training, consequently increasing the wear on these pitches. The turf tears very easily from rugby boot studs, especially in wet surface conditions. The grass roots are not deep enough or fibrous enough to resist the physical damage during normal play and there is little or no recovery of grass in worn areas. The soil-based pitches seem to have more resistance to die-back.

• Significant levels of damage occur in the spring as soil temperatures rise and moisture levels are high. This shows first on sand-based pitches followed by the soil-based pitches a few days later (weather depending). The damage seems to coincide with the spring hatch of root knot nematodes.

• Turf exhibits poor growth and vigour even after fertilisers are applied (except when high levels of nitrogen are applied). The poor colour of grass can be an aesthetic problem, as TV cameras regularly record highlights of rugby matches played at the grounds.

• Grass die back and browning of leaves occur within a few days of warm dry conditions. As there is no efficient system for watering the turf, the grass shows drought stress symptoms very quickly.

• When reducing the height of grass on the rugby fields to that required for the cricket outfield, the grass growth becomes stunted and die-back occurs, even when height is reduced in steps over a number of weeks.

• The cricket wickets themselves tend to perform badly, and only two matches can be played on each wicket before a new one is needed. There is not enough strong root growth to bind the clay correctly and grass recovery is poor after matches. 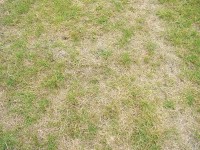 Currently, a high level of spiking and aeration is implemented across all areas. Soil testing for nutrient deficiency is performed once a year with fertilisers applied as necessary. The use of a seaweed based liquid fertiliser has shown to have an positive impact on nematode attack and reduces the visible surface damage on the turf. This approach has a limited use in the winter when grass growth is poor. Biostimulants have been used on one full pitch and this has been shown to reduce visible damage, although full assessment of this trial is not yet complete.

During 2008 I have tested a range of different products at Shawsbridge. These have included soil amendments to reduce nematode levels and biostimulants to lower turf stress. The most effective of these will be used in full field trials during 2009. The rest of the sports areas will be treated with seaweed based liquid iron and higher levels of nitrogen in slow release fertilisers.

A combination of sand-based rootzones and changes in climate appear to have created the perfect home for plant parasitic nematodes in our sports fields.

There is currently no simple solution to controlling these pests, so a range of management techniques must be used to minimise their impact on the sportsturf. Sadly, until a more effective method to control them is found, we must add nematodes to the long list of pests and diseases we have to deal with.