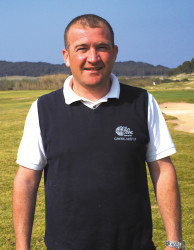 Jason O'Keefe reckons that working in Spain is a pleasure but you have to be prepared for hard work and some quick learning of the lingo!

The second biggest island in the Balearics, Menorca (35 miles long and 9 miles wide!), is an intentionally underdeveloped island preserving its natural beauty and maintaining its culture and traditions. There are no high rise hotels and no over-commercialised resorts, with the main towns only being as big as a small village in the UK, and the main 'motorway', which stretches through the centre of the country, is what we in the UK would call a dual-carriageway!

The people are very friendly and hard working, contrary to common belief, they also work longer hours than most people in the UK and other European countries.

Golf Son Parc is the only golf course on the island and will probably stay that way as long as the environmentalists on the island have their way, as the island is also an official biosphere reserve.

The course started out as a nine hole course back in 1967. In 1987 Son Parc was acquired by Hugh Brown, formerly a businessman from Manchester, but with a passion for golf. He has invested in the development of the course over the past twenty years, recently extending it to eighteen holes. There were many obstacles to overcome, including the rocky terrain, lack of resources ... and the environmentalists, as the extension of the course encroached upon the wetland reserve.

Situated on the north coast, just three hundred metres from an award winning beach, it is surrounded by pine and olive trees and a

wetland reserve. It is a naturally beautiful area with a great variety of birds and wildlife. We have even had wild goats on the course, which caused a few problems for our young trees and shrubs as they ate the lot!

They did help the maintenance team, though, with the semi rough cutting! With the course being in a sensitive area our greenkeeping techniques have to be carried out with as little impact as possible to the environment, and with minimal use of fungicides and herbicides. We use only natural based fertilisers. We also only use collected water from the winter rains and recycled water from two local resorts in the summer. So, as a consequence, we rely quite heavily on the visiting tourists in the hottest months as the more of them there are the more water we receive!

The club is heavily involved in developing the sport of golf and has an outstanding Junior Academy run by resident professional, Gustavo Flavio, who puts in a lot of time and effort. The Academy team has won many trophies against other juniors from neighbouring Majorca and mainland Spain and are hoping for success this year with a competition against the Cheshire Union Juniors in May.

Working in Spain is a pleasure but you have to be prepared to work hard. It is not a holiday and don't think that you can slow down just because it is hot! Things are entirely different compared to the UK as the grass, weeds, trees and shrubs are so much more aggressive here - that means two to three times the maintenance and pest/disease control you are used to in the UK.

Of course it all depends on what the season's weather is doing but, generally, things are much harder in that respect. You also have to learn Spanish to at least be able to communicate at a decent level. Fortunately, I was thrown in at the deep end and had to pick the language up quite quickly so, at first, I just learned how to give basic commands in golf course terminology; for example "Cut the fairways please - por favor cortar calles". This way it was easier for me and then I could work on grammar and stringing sentences together in my own time.

If you have a family you have to consider what your wife/partner will do for work because, if they don't speak any Spanish, they are limited to seasonal work in the tourism industry. Also, it can be difficult settling down and buying a property unless you have a large amount of equity on your property in the UK when you sell up.

The cost of living is generally less than the UK, but not that much cheaper, although housing is more affordable. Quality of life is, however, far better as, along with your holiday entitlement of twenty five days, you also get fifteen 'fiestas' off! But, often I need to prepare the course in the morning and then make my way to the celebrations later! There are enough beaches here for a visit to a different one every day of the year and, with the island being so small, it does not take too long to get to them. So, for me and my family, enjoying watersports and relaxing on the beach is great.

Originally, I am from Croydon in Surrey, so living in Spain is a huge change from the daily commute through choked up traffic and road works.
In all fairness I had worked at some great golf clubs in Surrey which helped me escape from the environment I lived in. I took an apprenticeship at the age of sixteen at Croham Hurst Golf Club, thanks to Rodger Tydeman, who was a great mentor, and the club who invested in my level one and two at Plumpton Agricultural College in Lewes. Ambition moved me on, five years later, to Walton Heath Golf Club under Clive Osgood. I wanted to gain as much experience as I could from different course managers in order to extend my knowledge of greenkeeping. I thoroughly enjoyed my time at Walton with Clive and the team and learned a great deal from them. 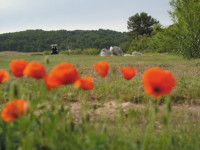 I moved on from Walton to take up a Deputy Head Greenkeeper position at The Surrey National, which is part of the Altonwood Group owned by Ronald Noades, the former Crystal Palace FC chairman who now owns five courses around south Surrey. I had the opportunity to move around the various courses within the group, helping out on projects, which kept things interesting. The expected arrival of our first child prompted my wife and I to consider our future, and we decided to look at living in Spain in order to give our daughter a better quality of life, so I started my search for potential employers on the internet.

I sent my cv to all the courses managed by English owners to give me a better chance of success and had a reply from Son Parc who, following an interview in Menorca, offered me a position of Deputy Head Greenkeeper. This was not a decision taken lightly as, initially, I had to leave behind family and friends, including our new addition to the family. However, we have now been living here a year and are well settled into the Spanish way of life. For me and my family the move to Menorca was the best thing we have ever done and we certainly have no regrets.