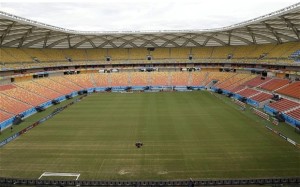 The groundsman responsible for the pitch at the Manaus stadium which will host England's clash with Italy on Saturday admitted the playing surface is in "bad shape" and would not be much better when the game takes place.

England will arrive in Manaus on Thursday and plan to send an official to inspect the surface, which looked dry, patchy and marked in pictures taken over the past 48 hours.

Carlos Botella, head groundsman for the Royal Verd company which is responsible for the turf at Manaus and six other World Cup stadiums, has conceded that Saturday's game, which will played in severe heat and humidity, will be played out on a desperately inadequate surface.

He said his groundsmen were carrying out emergency measures to try to improve the surface, and blamed the remote location of the host city for the problems.

"Frankly, Manaus is in bad shape," Botella said. "We've started to implement an emergency plan to try to save the field and improve it as much as possible, but I don't think it'll be in good condition by the weekend.

Article sourced from The Telegraph