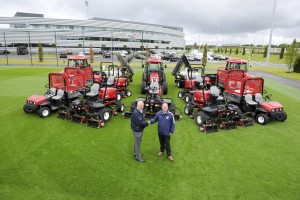 The 80-acre regenerated brownfield site is adjacent to the Etihad Stadium and part of the wider 200 acres known as the Etihad Campus.

MCFC grounds manager Roy Rigby, the man behind the decision to work with Toro, says it was a choice heavily based on reliability and his long history with the brand.

"The CFA has 16.5 football pitches in total, 13.5 of which are natural grass, so reliability is key. With Toro, I know that no matter what the weather, the machine will always turn on and get the job done to the same high standard time after time," Roy says.

Having worked with Toro and Cheshire Turf Machinery for the past 25 years of his career, Roy says he's developed a great relationship with both companies over the years.