0 Mankar - weeding out the costs of spraying In these recessionary times, with our Local Authorities under severe financial constraints, yet still charged with the delivery of more environmentally sensitive open spaces, tales emanating from the Wyre Forest District Council's Parks & Green Spaces team, of budgetary savings, coupled with increased productivity, led Neil Hancock to meet with Supervisor, Joshua Brady, to find out the secrets of their success.


Two years ago Joshua left his South African homeland and his environmental work in the Kruger National Park to start a new life for himself and family in the UK. He commented "I met my wife-to-be Louise in South Africa whilst working at Buffalo Hills nature reserve. She is a British citizen and had been working on a contract in Port Elizabeth with General Motors for three years. Two years after we met, we decided to tie the knot, then Louise fell pregnant and with that came her desire be near to her family. She returned to England for a six month period for the birth of our son and I joined her for three of those months before we all returned back to South Africa.

Just over a year later Louise fell pregnant again, and again the desire to be close to her family came through strongly. We finally decided that Louise would return to 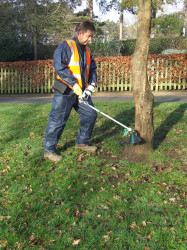 the UK and I would follow as soon as possible. Louise had lived with me for a five year period in South Africa, so it was only right for me to do a three years in the UK, which has now been extended to five! I did apply for a number of Ranger posts closer to our home in Shifnal, Shropshire but, due to a perceived lack of UK conservation knowledge, I was not given the opportunity.

Eventually I saw that Wyre Forest District Council were advertising a position within their Parks & Green Spaces department and it was, in fact, my project management skills that, in the end, got me the job."

Joshua continued "as a department, we are charged with the task of delivering the best possible service we can within budget, and we set about looking at the ways in which we currently worked and how we might improve to reduce costs, whilst also keeping in mind our overall remit and any environmental impact. In all areas, we work closely with the Rangers department. We undertake a lot of tree works for them, removing species such as Crack Willow and re-planting specimen trees to encourage bio-diversity."

"One area we have particularly focused on is our weed control programme and, following our own product research, we now carry out an increasing amount of work in both our nature reserves and parks with the Mankar pressure-less spraying system. This particular work impacts directly on bio-diversity, as the invasive plant species we control are naturally very monoculture and take over from a number of indigenous plants. Himalayan Balsam (Impatiens glandulifera), Japanese Knotweed (Fallopia japonica) and Giant Hogweed (Heracleum mantegazzianum) are typical examples of the type of weeds that we now control with use of the system."

"We also assist our Rangers in the construction of boardwalks, particularly in the very boggy areas where we reduce the impact on the environment and the amount of trails within these particular areas. A raised boardwalk ensures no obstacles for animals to come and go as they please, and also th ey allow the flow of water to continue unhindered. All of these factors preserve the environment and allow the areas to continue and thrive as they should."

"Parks and Green Spaces also assist in preserving the acid grasslands found within the Wyre Forest District area. Here, we conduct a yearly cut and collect programme with the Rangers to ensure these rare grassland areas do not remain impoverished, and to ensure their continued survival which greatly benefits bio-diversity. We also assist in the clearance of reeds from streams if they become 'choked up', which allows a natural flow of the system to ensure all species benefit from the watercourse. This, in turn, also serves to help our flood defences."

"Prior to the introduction of the Mankar system in 2009, we were using the CDA (Controlled Droplet Application) system, but market and product research proved to us that it was, in fact, both overly expensive and under-performing. With the twenty two Parks and Green Spaces team members we had at that time, the back-pack system we employed was difficult to both 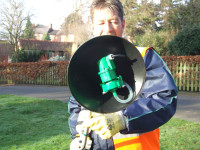 manage and control financially. It was expensive in terms of material cost, as we were spending around £1400 a year just on herbicide, plus what we were spending on lance repairs. Due to the volume of herbicide we were consuming, we also had an additional annual cost of £400-500 a year for the disposal of containers and the subsequent impact of that process on the environment."

"Overgrown paths are cut back manually, and then the saplings that sprout are controlled with the use of Roundup. Only 0.1-0.2 gallons of herbicide are required per acre and, when compared with conventional systems, such as knapsack sprayers, volume savings of up to 80% are achievable. Also, herbicides can be used undiluted, reducing our work time and using less of our resources. We are achieving savings in both herbicide volume usage, and a financial saving of around £900 a year."

Adrian Leonard, who works alongside Joshua, then took me on a visit to Brinton Park, one of the many open spaces that Wyre Forest have to maintain, to show me the range of work situations that the new system is applied to. He said "we use it in all of our public parks and open spaces along flower-bed borders, pathways, edges, verges and around obstacles and tree bases. Not only are we saving money, but we are also seeing an improvement in the quality of the areas we maintain, which has resulted in the authority currently having two parks up to Green Flag status and a further three more pending."