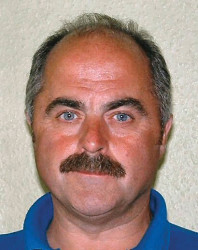 "Scotland doesn't have a climate, just weather - we have two seasons - July and Winter!"

No more cutting. No more rolling and no more crease marking! Time to put the feet up and relax for six months ... or so some people think! Pah! Renovation time is when my season begins!

I suppose my renovation procedures are broadly similar to the rest of the UK, following tried and tested methods that have been established over many years. Being located in Aberdeen, my main consideration is the dropping temperatures almost as soon as the cricket season ends, so speed is of the essence for renovations to be effective.

Founded in 1857, Aberdeenshire Cricket Club is situated within a degree of the latitude of Juneau, the capital of Alaska in the West and St Petersburg, Russia in the East which, I believe, makes our ground at Mannofield Park the most northerly One Day International accredited ground in the world.

The Grampian mountain range is a few miles west of the ground and offers valuable protection from the weather fronts which predominantly come from that direction. The end result being that drier but colder conditions are prevalent here, whereas the areas to the western side of the mountains have the advantage of the Gulf Stream, which promotes milder but wetter weather.

Comedians frequently comment that "Scotland doesn't have a climate, just weather!" and "We have two seasons - July and Winter!"

Presently, I'm sitting in the umpires' room which is looking across a windswept outfield; winds are gusting to 50mph, fortunately, the mobile covers have been stripped

and the four sightscreens pinned and guy roped down.

This year, I managed to get my renovations started in the second week of September, although two problems had to be resolved whilst in the middle of the cricket season - the hiring of a tractor-mounted scarifier and the increasing cost of getting loam into the northeast of Scotland.

Since starting here in 2001, I had been able to simply lift the phone to Sisis and obtain the use of a TM1000 scarifier for my fourteen pitch square. However, with the acquisition of Sisis by Dennis last year, and the closure of their Scottish outlet, this facility is no longer available. So, after several phone calls, I discovered that the closest implement I could source for hire was some 120 miles distant in Linlithgow; a town made famous for being the birthplace of Mary, Queen of Scots and a skean dubh's throw from where William Wallace and Robert the Bruce put the Auld Enemy to the sword. Hardly just up the road!

I can't justify an outright purchase of such an implement, but I feel sure that there is a business opportunity for manufacturers or retailers to provide a rental outlet in this and other locations in Scotland. I'd be happy to discuss the options!

At the eleventh hour, a local contractor provided me with a machine to use after having cut the whole of the square down to 5mm, allowing four passes over the square to a depth of 6mm thereby cleaning out the surface and providing a seedbed.

I've been using a TM1000 for the past ten seasons at a greater depth to remove a thatch layer and, as you will see in the photograph, a rather large amount was extracted in year one. Nowadays, I don't get a quarter of what you see, although the Law of Diminishing Returns dictates that year-on-year, I'll get to a stage where I'd be removing some of the good material laid down in previous seasons. It's a question of balance, I suppose!

Of course, as luck would have it, rain intervened during the final pass, which meant that I had to postpone the completion of the scarifying for a time whilst the surface dried, with the inevitability that the tractor tyres were closing up the scarifying slits during the completion of the final pass, although the ground was ideal for final cleaning with a Sisis Rotorake scarifier fitted with a brush reel. A case of two steps forward and one back!

With a proportion of the surface having closed over, a Sisis Variseeder came into its own by making thousands of holes over the square, followed up by distributing grass seed simultaneously. With several passes in different directions, complete coverage with Barenbrug Bar Extreme grass seed was achieved at a sowing rate of 70 g/m2. 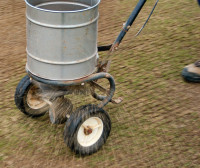 This was followed by an application of Mascot 3:5:10 fertiliser and Activate-R granules; the latter to aid root development; both being applied with a cyclone-type spreader then brushed in with the aid of a four foot dragbrush.

Boughton County loam has been the preferred topdressing for many years here, but the price has been escalating due to ever increasing transportation costs. Two years ago the price per 25kg went over seven pounds per bag, albeit with delivery. This did not include tax, however!

Clearly, the way forward was to consolidate deliveries into the area.

Previously, I had spent twenty-five years as an Operations Manager in the transport industry, so it made economic and logistical sense to seek out other grounds to get together in a joint venture.

To this end, I hooked up with JMS Sport UK of Keighley, West Yorkshire who could supply the desired loam, with the added bonus that they had contacts with a distribution company, which could deliver with a vehicle that could drop the pallets off with the aid of an on-board forklift, as some of the delivery points are inaccessible to an articulated vehicle. One is located within the perimeter security fencing of Aberdeen airport, with the other located in a small park having only a single track lane for access.

By consolidating the load with six other grounds, it brought the cost, including delivery, down by two pounds for each bag. Grass seed and fertiliser was also supplied, which achieved even greater overall savings.

Spread with a powered topdresser, eight bags of loam per pitch completed the covering of the seed, with the whole of the square being leveled with a 3 metre Levelute. Additional loam was applied to any low areas and bowlers' footmarks, with a sprinkling of grass seed being applied by hand in particularly deep spots, and mixed through with a Springbok rake.

With rain falling that evening and a soil temperature of 16.8OC, germination was all but guaranteed!

Sixteen days later the entire square was able to be cut in two directions with a sharp, correctly set cylinder mower at a height of cut of 19mm. 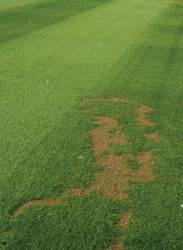 An inspection of the square had revealed areas where new grass had not appeared. These areas occurred where, a few weeks earlier whilst cutting the outfield, a pipe had split on my outfield mower and had sprayed hydraulic fluid over some wicket ends.

A post on the Pitchcare message board asking for advice was answered by Andy Mackay, Head Groundsman at Sussex County Cricket Club. In the past he'd had a problem with rock salt contamination on his grass and suggested I try spraying carbon on the affected spots. He suggested I contact Collier Turfcare of King's Lynn who could supply a product manufactured by Prestige called Super Liquid Carbon.

At this juncture, I must say that I wasn't too hopeful of a result, as their Managing Director warned that it really needed to be applied within an hour or so of the spillage occurring to achieve maximum results. Equally, it wasn't going to do any harm either.

So, the recommended dose was duly applied, with the affected areas being oversown again and lightly topdressed a few days later.

Three weeks later, still no recovery. Ah well, was worth a try!

By this time, following 68mm of rain and three frosty nights, the square was capable of 'taking a tine'. Over the past six seasons, conditions hadn't been conducive to getting a spiking machine on and, when they were, I couldn't get hold of a vertical cam-action machine quickly enough, as I don't have one in my garage.

In all honesty, I haven't detected any fall-off in pitch performance by not having spiked. A Performance Quality Standard (PQS) test revealed a mean rebound factor of 23.77 out of a possible 24. The PQS also showed no root breaks or layering in a soil profile sample with roots going down to 240 mm. If it isn't broke, then why try and fix it!

We always endure hard frosts up here, and I had always assumed that the profile decompacts naturally by the associated expansion and contraction. Minus 15OC is not uncommon here. I recall, in 1982, when the temperature dropped to minus 27OC. My moustache almost dropped off that night, thank goodness nothing else did!

Having said all of that, this year I was offered, by Robert Gordon's College Aberdeen the use of their Wiedenmann Terraspike XP to open up my outfield. Whilst having the machine, I carried on to solid tine the square with its 19mm tines in a 125 by 100mm pattern and 5 degrees of heave to a depth of 125mm.

Whether I'll notice a difference in the future, only time will tell!

Ten days later I was down at the square giving it a further fertilise with 5:5:10+Fe as some Red Thread was starting to make an appearance. Lo and behold, some germination had taken place in the hydraulic oil contaminated areas and shoots of recovery were apparent. Not great, but in evidence, nevertheless.

I surmise that the carbon had been adsorbing the oil, id est., locking the chemicals to its surface and nullifying the harmful effects.

Okay, I'll still have to reseed some of the areas once soil temperatures lift, but I hope that, by the beginning of next season, the soil will be capable of sustaining 100% germination.

With the excess hours worked and days off not taken during the season, I'm now working twenty-one hours a week and owed forty-five days off in lieu, forty of which are required to be taken before the end of this year. Think I'd better stop working now and reappear after New Year!

But, wait a minute. Who's going to keep the outfield and square trimmed, keep an eye out for disease, give the machinery its annual service and all the other jobs which can't be performed during the playing season?

Perhaps it's now time to put my feet up. Hah! Don't be ridiculous!