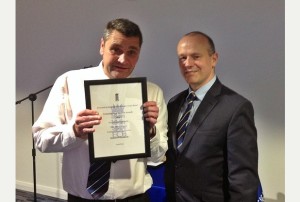 The 55-year-old leads a team of ten full-time staff which was recognised at the 2015 England and Wales Cricket Board Groundsmen of the Year award.

Simon said: "It's a collective effort by the team to get the games on and give the players the best possible pitch to play on.

"The award is based on ratings given by the umpires so it's pleasing to be regarded as one of the best.

"We work long hours in the summer so it's great to celebrate the effort and planning that goes in."

Kent welcomed the Australian touring side to The Spitfire Ground, St Lawrence in Canterbury ahead of the Ashes and the world champions were very complimentary about conditions in Kent.

Matchdays vary according to the competition: the team prepare the ground the outfield and practice nets for Championship matches at 7am and can finish as late as 11pm for NatWest T20 Blast evening matches by covering the square.

The 22 yard strips in the middle are the focus of many players and spectators with the colour, grass coverage, dryness and texture seen to be influential in the tactics of a side.

Pitches have been a hot topic in county cricket in 2015 with many counties perceived to prepare pitches to suit their side.

To combat so-called 'result pitches', a new rule will be trialled in the 2016 County Championship to give the visiting captain the choice to bowl first or revert to the traditional coin toss.

Simon is relaxed about the rule change and said: "At Kent, we don't have a culture of coach interference. The chief executive is very supportive and lets us produce the best possible pitch we can. Full story from the Isle of Thanet Gazetter here: http://www.thanetgazette.co.uk/Manston-man-wins-national-sport-award/story-28465683-detail/story.html#ixzz3wNeByilB