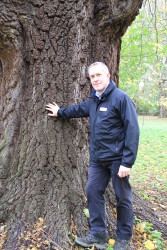 We continue our occasional series on English Heritage sites by visiting Marble Hill Park in West London, where the organisation's Landscape Manager for London and West Midlands, Brian Clarke, is tasked with overseeing its ongoing upkeep, maintenance and ecology. This includes various sports facilities, an ancient Black Walnut tree, an ice house and a scary looking spider!

Marble Hill Park, one of over four hundred properties maintained by English Heritage, is set in sixty-six acres of outstanding riverside parkland near Richmond in West London, and is unique in that it is the only English Heritage site that provides and rents out sports pitches to local teams.

It is regularly used by fourteen local football teams, four rugby teams and fifteen cricket teams, each of whom provide an important source of income for the site.

Marble Hill House was built for the remarkable Henrietta Howard, mistress of King George II when he was Prince of Wales, and friend and confidante of some of the cleverest men in England. The house and gardens were intended as an Arcadian retreat from crowded 18th-century London. Its grand interiors have been exquisitely restored and recreated and include a fine collection of early Georgian paintings. There can be few places in England which better recall the atmosphere of fashionable Georgian life.

The house and stable block are still in use today and open for corporate events, weddings and education and training days. The park is widely used by the public for walking their dogs, picnics and sports activities.

The park has a team of four Rangers, including Andrea Arthan and John Telfer, this team organise activities on site, mentoring school groups, conservation projects and overseeing the running of the park

The day to day maintenance of the park is undertaken by local contractors, Scion Estates Ltd., on a five year contract.

Brian Clarke, is based in the park has spent the best part of twenty-seven years working for English Heritage, starting out as a gardener and working his way up to his present post of English Heritage's Landscape Manager for London and the West Midlands. Brian uses a schedule of rates style of contract to control the work required.

He was keen for me to see what the park has to offer in terms of its heritage, landscape features and sports provision. 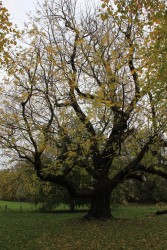 Our first stop was to see one of the rarest and oldest trees on the site, a very large Black Walnut (Juglans nigra). According to the Tree Register of the British Isles (www.treeregister.org/index.php) it is the third largest Black Walnut in the UK. The area around the tree is protected by a fence to prevent the public climbing it and avoid ground compaction underneath the tree. It has also been braced to prevent the large branches breaking. It is reported to have been planted during Henrietta's time, around 1725.

The considerable number of trees on the site have all been surveyed and tagged and a long term management programme set in place.

However, the recent 'Big Storm' did cause damage to some of the mature trees, so Gristwood and Toms, who currently hold a Tree Surgery contract with English Heritage for the London sites, carried out the repairs, removed fallen trees and branches and cleared up the debris.

Whilst on the subject of trees, Brian was keen to elaborate on the success of Gristwood and Toms in eradicating a difficult pest problem on the mature oak trees. For the last two years, they have been blighted by the Oak Processionary Moth (OPM).

The larvae feed on many Quercus species and a high population can lead to complete defoliation of trees, with a resulting fall in subsequent growth and vigour. This can have a financial impact on timber growers. Furthermore, the larvae have toxic hairs which can cause serious health problems to humans. 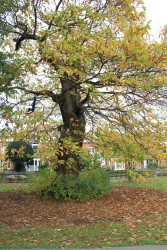 It was this final concern particularly that prompted English Heritage to act swiftly, carrying out regular monitoring and inspection of the trees. As soon as the moths were found, specialist equipment was brought in by Gristwood and Toms to spray the infested trees. In total, forty-six nests were discovered and, after two years of treatment, they have finally managed to successfully control the moth.

Inspections are ongoing and now, armed with the knowledge and experience of dealing with this pest, they are confident they can prevent it becoming a serious problem in the future.

Scion Estates has two permanent members of staff based at the park who undertake the bulk of the work required, bringing in additional staff as required. The majority of the grass areas are cut using a Ransomes Commander five cylinder ride-on mower, with an Etesia rotary cut and collect mower used on the smaller lawned areas around the house. Grass is kept to between 25-50mm in length on all the sportsfields and amenity areas except the rugby pitches, which are maintained at 100mm.

The artificial cricket wicket is available for rent between April and September and, as well as being used by cricket teams, is popular with fitness clubs who to use it for exercise practices.

The wicket has been down for many years and there are plans to install a new one soon. The park also provides two artificial net practice wicket with cages.

The cricket outfield is usually cut weekly, generally on a Thursday to accommodate weekend matches, maintaining a height around 25mm. The wicket is set right in front of the house and provides a lovely backdrop for a game of cricket.

The two rugby pitches are usually cut within twenty-four hours of any fixtures. The four football pitches are mown to a height of 25-50mm.
The Scion staff carry out checks on all football goals, rugby post and cricket nets every Monday and Friday to ensure they meet health and safety requirements. Linemarking is undertaken on a weekly basis using a spray jet linemarker.

Harrowing and spiking of the winter sports pitches is carried out twice monthly from September to March, weather permitting, with aeration tines set between 100-150mm. During the summer months the outfield is slit tined monthly.

End of season renovations are carried out on the areas surrounding the wicket and practice nets. These are aerated, scarified, reseeded and topdressed, in September, to rejuvenate worn sections, whilst the football and rugby pitches are scarified, aerated, topdressed and overseeded in May. The tarmacadam tennis courts are inspected daily, swept and kept clean and free of litter debris.

Our next port of call was the old ice house, a subterranean brick structure, used for the storage of ice and, in turn, the preservation of food.

When ice is packed together, its relatively small surface area slows down the thawing process. The ice would last longer when kept at a regular low temperature and insulated by straw, thick walls and a roof. Ice houses were usually located close to a water source, such as a lake, in order to easily harvest the ice in the depths of winter. They were pretty efficient, with the ice lasting as long as eighteen months.

On entering the ice house, I was shown some very large spiders that have made it their home. The wardens are quite proud of the fact they have this spider, the Orb-weaving spider (Meta bourneti), residing in their park as it is considered quite rare and, I confess, a touch scary!

Whilst on the subject of ecology, the wardens hold workshops on how to build insect hotels, hedge laying and other country crafts.

Marble Hill Park is still providing a place to be seen socialising, carrying on the tradition of Henrietta when she was in residence and entertaining her guests some 280 years ago. It's a valuable asset for the people of downtown Twickenham.

Following my visit to Marble Hill Park, Brian was keen to take me to see another historic site nearby, Coombe Conduit, a Tudor spring water storage facility that was built over 350 years ago.

We drove up Richmond Hill, stopping to see one of the finest views in London - one that is protected by an Act of Parliament!

Coombe Conduit, which is now tucked away in the middle of a housing estate, formed part of a system which collected water from nearby springs and channelled it to Hampton Court Palace.

One of three such conduits that supplied the palace, the remaining structure represents an intriguing survival of the ingenuous Tudor waterworks system. Coombe Conduit is the largest and best preserved example.

Conduit houses were built on or near springs and contained a series of collecting tanks connected to a pipeline (or conduit). On Coombe Hill there were three conduit houses - Coombe, Gallows and Ivy (sometimes referred to as Bush) - which collected water, from where it was piped just over three miles, under the River Thames, to Hampton Court Palace. All of these building still survive.

In addition to the conduit houses, the system contained six Tampkins (or Tamkins) which were smaller buildings along the route, some of which had additional tanks for further filtering of sediment, and all had a type of stopcock or 'tamp' which could be used to isolate sections of the system for works to be carried out. Unfortunately only one of these buildings - Gallows Tampkin - still survives.

This system of supplying fresh water is not unique; indeed, English Heritage care for two other conduit houses near Canterbury and Oxford, but it is almost certainly one of the largest ever constructed and was in constant use for over 350 years, from when it was constructed in the early 16th Century until it was finally abandoned in 1876. It is estimated that over ninety tonnes of lead were used in the pipe system.

Anyone who wishes to find out more details on the whole system should read The Conduit Houses of Coombe - the ancient water supply to Hampton Court Palace by Patricia Panizzo and Sue Lown, available for £3 from Richard Fishenden (richard.fishenden@holycrossprep.com).
All proceeds go towards the upkeep of the conduit houses.

The species has a widespread but scattered distribution in southern England, with one record from Wales. It has been recorded from France, Germany, Switzerland, Romania, Italy and the Iberian Peninsula, but it is possible that some European records of the European Cave Spider (Meta menardi) refer to Meta bourneti.

M. bourneti is generally regarded as an underground dweller, e.g. tunnels, culverts and drainage inspection chambers. However, males have been recorded close to ancient oak trees in Sherwood Forest. This suggests that the hollow trunks of ancient trees may provide similar conditions to those found in the spider's acknowledged habitat, i.e. dark, damp spaces of sufficient dimensions to enable the large orb web to be spun. Halstead (2000) located a colony in the hollow stump of a lime tree at Burley in the New Forest. M. bourneti is very similar to M. menardi, both species having a glossy appearance and a similar size. Further searching for M. bourneti needs to be carried out to confirm its habitat range.

The spider is found at rather few sites but often in good numbers. It may be under-recorded due to its unusual habitat and confusion with Meta menardi, especially where adults are not identified through critical examination using a microscope.

Where the spider inhabits ancient, hollow trees there is a danger of damage to the habitat through the uninformed 'tidying up' of dead and decaying timber.

Recommendations for management of M. bourneti are difficult to make without a fuller knowledge of the habitat requirements and the true status of the species in the British Isles. Further field investigation and search for the species is required.