For Europe's Ryder Cup team, 2023 probably can't come quickly enough. And the opportunity to lay to rest its record-breaking defeat at Whistling Straits will take place on what is effectively a brand new course. 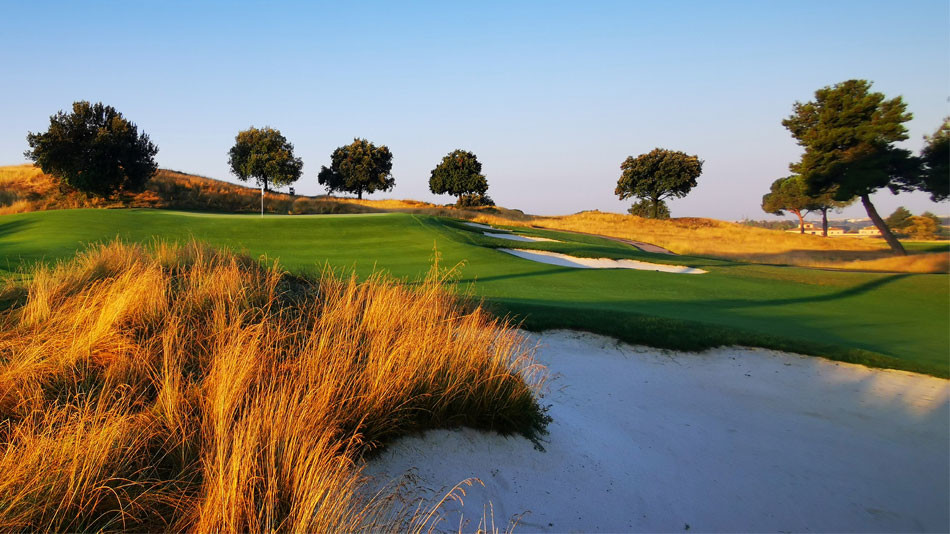 Marco Simone, located on the eastern outskirts of Rome, will be the first Italian club, and the third in continental Europe, to host the event. When it was chosen in 2015 as the venue for the third most-watched sporting event in the world - after the Olympics and football's World Cup - it was seen as a surprise choice; most observers expected either PGA Catalunya in Spain or Sporting Club Berlin in Germany to be selected.

The original design, created by Jim Fazio and David Mezzacane, first opened for play in 1991 and hosted the Italian Open three years later, but the tournament never returned.

In December 2015, when the club's owner, fashion designer Laura Biagiotti, submitted - with support from the Italian government, the Federazione Italiana Golf (FIG), the Italian National Olympic Committee and other stakeholders - a bid for the Ryder Cup, it was on the basis that the course would be completely rebuilt.

European Golf Design (EGD), having been involved in the redesign at both Le Golf National in Paris and Celtic Manor in Wales for the 2018 and 2010 events respectively, was a natural choice for the work.

For the Marco Simone project, EGD's Dave Sampson was installed as the lead architect with the firm's managing director Jeremy Slessor responsible for working with the club and various other organisations involved in the project, such as the FIG and Ryder Cup Europe. "Having Jeremy overseeing the project from that side was great, as it allowed me to concentrate on the design of the course," says Sampson. 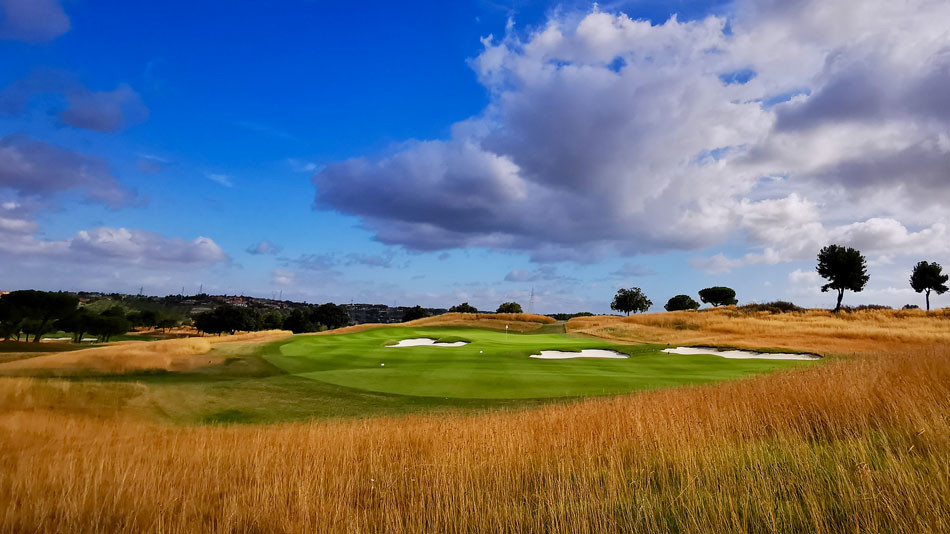 Construction began in 2018 with Italian firm Zeppieri overseeing the first phase (back nine) of earthworks and SOL Golf of Ireland handling feature and finish work. SOL then took over both earthworks and finishing for phase two (front nine), with Tom Fazio II playing an important role in managing construction. A supporting cast of specialists included Aquafert, which handled irrigation, Capillary Concrete, EcoBunker, Toro, Pure Seed and Atlas Turf International. A team, led by former Le Golf National superintendent Alejandro Reyes and his fiancé Lara Arias, now the Marco Simone superintendent, took over the grow-in of the course in mid-2020.

The redesign was driven by the desire to create a course suited to match play golf and for the property to be able to handle mass crowds: 270,000 people descended on Le Golf National when it hosted the contest in 2018.

Now, nothing remains of the original course at Marco Simone, with only the sixth hole even playing in the same corridor. Every other hole is now in a totally different location or orientation.

"One of the issues with the old layout was that, from a spectator and player point of view, there were a lot of crossing holes, with links between greens and tees crossing numerous times," says Sampson. "For a Ryder Cup this becomes really difficult. So, one of the big changes was rerouting the course to consider spectator movement, grandstands and hospitality."

This is apparent from the outset, with the first hole located in a natural basin, which also accommodates the downhill par-three seventh, driveable par-four sixteenth and the par-three seventeenth. "This area is our little touch on the Colosseum, with the basin giving a view of at least three holes from any one point," says Sampson. "When routing the course, we felt this was the key part of the site for a Ryder Cup, and we consciously made sure that we routed holes from different key points within the round back to this basin. Players dip in and out of this 'valley', providing a great spot for spectators and hospitality units." 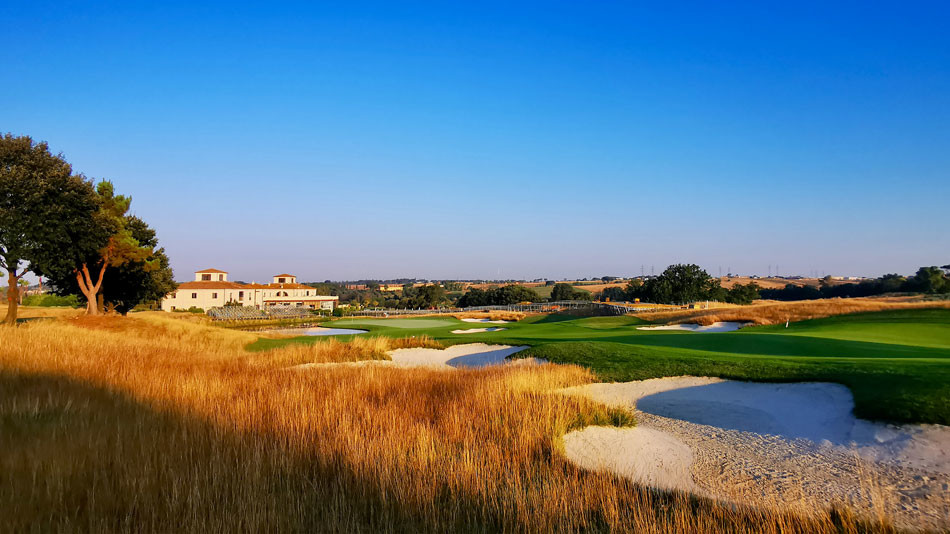 Marco Simone's par-five eighteenth has bunkers down the left side of fairway and a lake left of the green. Image Marco Simone

"There were quite a lot of areas that had become unkempt and overgrown since Marco Simone first opened 30 years ago," says Sampson. "The trees and bushes had grown to the extent that the site had lost its great views. We've stripped it back to clean up the site and open those views for both the golfer and spectator.

"The one thing that I think will be remembered from this Ryder Cup is the long-distance views of numerous golf holes, which we feel is extremely important. What the club has done over the last three or four months is manage and trim the trees and it's really given the course a neat and tidy look. This trimming work has allowed the umbrella pines to take centre stage and you can quite clearly see that this is a Rome course and authentically Italian."

Marco Simone hosted the Italian Open for the first time in 27 years in early September, giving spectators and television viewers a first opportunity to immerse themselves in what is undoubtedly an Italian experience. The rolling site features views of the Castle of Marco Simone, old Casali buildings, olive groves, nearby villages and Rome's skyline. This is especially evident on the back nine, which is routed on the property's highest elevation. 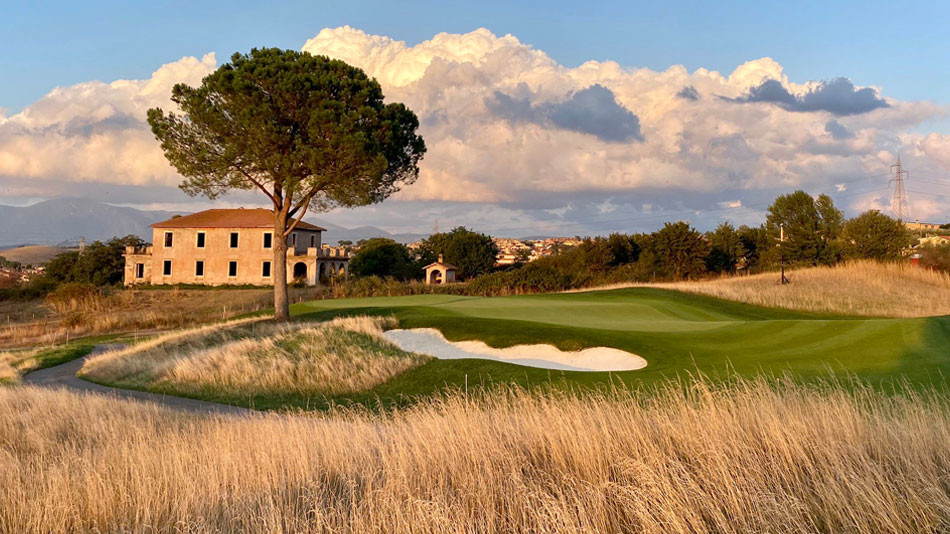 "I consciously routed the course so most of the risk and reward holes come on the back nine: the eleventh, twelfth and sixteenth definitely spring to mind, but we've got flexibility on the fifth to push the tee forward to create a driveable par four," says Sampson. "All the par fives are reachable in two because having that excitement option is important for the Ryder Cup.

"One of the successes of the project has been the routing. It builds through the round to those climax points on the back nine where you've got the risk-reward holes and the views across the course. This constant build then reaches an emotional high at the short par-four eleventh, where players can drive the green, followed by a great tee at twelve where you get a view of Rome for the first time, which we come back to at sixteen and eighteen."

As work progressed, archaeological discoveries were encountered on the property close to where the twelfth and thirteenth holes are now located. And given the tight schedule - work was completed in October 2020 - some design changes were made during construction.

"We've had to adjust holes twelve to seventeen, but where we are now, the course has become better for it," says Sampson. "The twelfth is a far superior hole doglegging to the right than it would be playing straight. At the sixteenth, it was the archaeological restriction, particularly the time it was going to take to get a permit, that led us to change the hole's direction by 90 degrees. That has been one of the huge finds, turning the hole and playing 25 metres downhill, with the tees set on a high point over Rome. 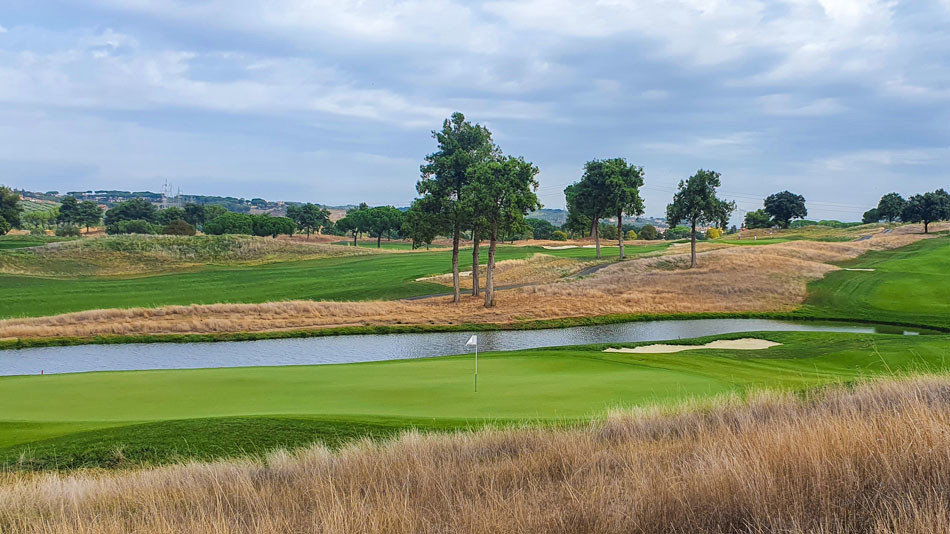 A view of the sixteenth green from where a hospitality stand will be located. Image GCA

"The restrictions squeezed us in a way, but what it will create for the Ryder Cup is an unbelievable atmosphere in and around the twelfth green, thirteenth hole, fifteenth green and the sixteenth tee. It is going to be incredible when thousands of spectators are gathered there. The restrictions made us look at things in a different way and you've got to make the most of it. When I look back, I really think that something good has come out of it."

While creating a course to host the Ryder Cup has been the main focus of the redesign, Sampson has ensured the layout is also playable for the membership at Marco Simone. The club reopened 18 holes to its members in January 2021, and according to golf course superintendent Lara Arias, the course has remained busy ever since.

"This is a golf course that gives golfers of all abilities options," says Sampson. "Generally, it is much wider off the tee for the average golfer and narrows down the further off the tee you go.

"The layout isn't overly long, it's 7,300 yards from the back tees and 5,700 from the front, with the main defence being in and around the greens.

"One of the encouraging things that we saw from the recent Italian Open was that the course also plays really well as a stroke play event."

Some minor tweaks the club was considering will go ahead following the course's tour debut, such as expanding mowing lines closer to lake edges.

By the time the Ryder Cup arrives in 2023, some other important projects will be complete, including the clubhouse renovation, a new driving range and the transformation of the nine-hole resort course into the spectator village. Marco Simone will have also hosted two more Italian Opens, giving the Marco Simone team additional valuable experience before it hits the world stage in September 2023.

This article first appeared in the October 2021 issue of Golf Course Architecture.