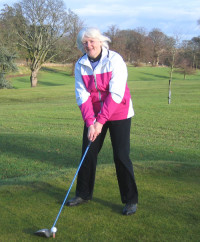 Margaret Manson is amused by the idea that she has struck a blow for feminism, but the silver-haired, specialist children's nurse, proud mum of two and avid home-baking, charity fundraiser has just joined an elite group of women golfers, by being elected Captain of the mixed-membership Binny club at the Oatridge College course in West Lothian.

The fifty-something from Livingston admits that she was apprehensive about taking on the job: "When last year's Captain proposed me, I was unsure how the membership would take it, but they have been very supportive". In fact she was elected unanimously by the 250 members, who include just 18 other women.

"I accept that I'm still one of a few women in this position, but it is the 21st century," says Margaret. That is as close as she gets to commenting on the lot of women in Scottish golf clubs, but Brian Inglis, the course manager at Oatridge, says: "It's rare enough for ladies and gents to be on a equal footing, paying the same fees for the same playing rights etc, but almost unheard of for a lady to be a full club captain. It's just not going to happen in about 90% of Scottish clubs in our lifetime."

Gillian Kirkwood, the founder of the Kirkwood Golf News and Scottish Golf View websites says women captains of mixed clubs are not as rare as some believe, though she admits she cannot think of another current one, citing instead Joan Lawrence and Jean Bald at Aberdour and Margo Blair at West Linton in the recent past.

The first woman known to have captained a Scottish mixed club was Miss C.A. Nicholson in 1930 at Craigmillar Park, a move described at the time as "almost without precedent", yet by 2001, when the Sex Discrimination Act was being brought into force, the Equal Opportunities Commission was warning: "All golf clubs should have equal rights. We are very keen to see clubs opening up to promote equal membership and not have this old fashioned level of membership whereby women are treated in a second class fashion." But even today it is not unusual to read on Internet forums that "women have no place on a golf course."

Brian Inglis says: "We are quite a new club (founded 2002) and because of that and the fact that the course is owned by a progressive college like Oatridge, which is committed to promoting equality across all of its activities, we wrote into our constitution that we would have no distinctions, just 'adult' membership and that our eight person committee must have at least one lady member. I suppose we were trying to speed up the process of having a lady member as club captain."

In Margaret Manson's case it worked. She has been a committee member for four years and last year was vice-Captain.

"Fundraising has been Margaret's strongpoint," says Brian Inglis. "Last year she almost single-handedly raised money on behalf of the Eve Appeal, after one of our lady members died of ovarian cancer. She reached more than £760, by organising raffles and tombola, selling tickets and finding prizes, as well as baking cakes and selling them at the club. She was the real driving force."

Fundraising will again be a priority for Margaret during her year as Club Captain, though she has still to pick a charity to support. She also sets out to try to attract more women players and encourage new and existing lady members to become more actively involved in club affairs. "I would also like to see the club moving forward and getting more involved with other clubs in competitions," she says.

Margaret, who comes originally from Wester Ross, works at the specialist orthopaedic unit at the new Edinburgh Royal Infirmary. Her husband Drew is also a member of Binny Golf Club.

The nine-hole Oatridge golf course was opened in 2000 and has been described as a "hidden gem" among Scottish courses. It is open to pay-and-play visitors, as well as club members and is a valuable learning resource for college students studying greenkeeping and groundsmanship. Website: www.oatridge.ac.uk/related_centres/golf_course