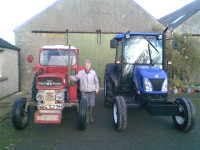 When Marina Chalmers says that her New Holland TN 60 DA is the best tractor she has ever driven, you can trust her opinion.

The 73 years young enthusiast, who has been at the wheel for more than 60 years, uses her latest acquisition for tasks on her 50-acre Orkney farm, as well as around her local parish.

"The tractor is essential for fencing, transporting stones and moving rubbish for recycling," says Marina. "We also take it to the post office and shop, because it is more economical than a car on short runs and warms up more quickly. Visibility is also much better."

Previously, Marina and husband Bertie had a 40-year old Massey Ferguson 135. "We wanted more comfort and it was starting to look scruffy," says Marina. "I had to stuff old clothes in gaps in the cab to stop draughts, and I had to wear a big jacket on cold days. The 2WD New Holland TN 60 DA has a super heater, and the power steering is lovely."

Marina bought the tractor from local New Holland dealer, Robertsons. "I'd always wanted a New Holland, and its blue livery is my favourite colour. And the salesman was so nice to deal with."

Marina has experience of many different tractors. "The first I recall is one built in the 1930s by my father and a friend, using the gearing of a 1 horse reaper. He then got a Fordson. In the mid 1950s I went on a working holiday to Canada, where I drove a big 2WD Massey Harris. When Bertie and I bought our own farm, we used a petrol Massey Ferguson, then a diesel model before buying the 135. But we've left the best till last with the TN 60 DA. It's got everything I want, and it's just perfect."

Most of Marina and Bertie's farm is now rented out, but previously they had 20 cattle and now have eight ewes, two of which are pure-bred Leicester's. "There's always plenty to do to keep us occupied, but at least now we can do it all in comfort," she says.