by External source
in Industry News
on 31 Jan 2013 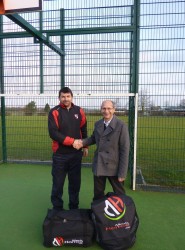 On 21st December, the Mark Harrod team met with Long Stratton FC, the winner of their 2012 Football Club Competition. For seven weeks, 64 clubs from all over the UK competed to get the most votes on Mark Harrod's Facebook page. Over 1,000 votes were cast, along with more than 1,000 new Likes, making it Mark Harrod's most successful online competition to date.

Finishing on an impressive total of 317 votes, Long Stratton FC came top of the table, winning the coveted prize of £200 worth of Mark Harrod training equipment. With 12 teams to cater for, ranging from under 10s to Veterans and including 3 female teams, Long Stratton FC was undoubtedly a deserving winner.

Unlike many clubs Long Stratton FC has a strong online following, which it made excellent use of to win the competition. The club frequently reminded its 822 followers to vote, and to Like the Mark Harrod Facebook page so that their vote was counted.

Long Stratton FC's manager, Steve Race, knew that the competition was less about skill on the pitch, and more about engaging the online fans.

'We actively followed the competition by reposting Mark Harrod's Facebook posts and constantly asking our followers to Like the Mark Harrod page,' he explained. 'And if they hadn't liked it, asking: why not?'

The competition created a lot of publicity for Mark Harrod. The weekly leaderboards maintained public interest, and the votes continued to flood in. In seven weeks Mark's Facebook Likes increased tenfold, from 132 to an incredible 1389.

Created and managed by Spring as part of an on-going digital marketing campaign, the Football Club Competition greatly increased Mark Harrod's reach, and raised awareness of the Mark Harrod brand. Spring knew that within the niche market of sport supplies brand awareness is crucial, and that raising Mark Harrod's profile was the key to increasing revenue.

Spring and Mark Harrod will continue to work together in 2013, furthering what has so far been a greatly successful digital marketing campaign.