by Nikki Berry
in Industry News, Rugby, and Football
on 19 Aug 2015

Mark Harrod Ltd have just put together their largest ever temporary installation of ball stop netting and goals, and given thousands of festival goers the chance to test their sporting skills at the Children in Need CarFest event 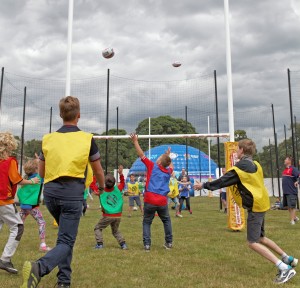 Four football goals, four netball goals and - most impressively - two rugby goals were erected at the event, as well as over 250m of ball stop protection netting to protect spectators and prevent errant balls disappearing. GoalFest was supported by coaches from Cheshire FA, English Netball and the RFU who were on hand to give the public tips to hone their scoring skills. The first event took place on the weekend of July 31st, which was a great success, and they're set to do it all over again at CarFest South on 28th August.

The temporary installation of the rugby posts and ball stop posts is only made possible thanks to Mark Harrod's new ground screw. This exclusive addition to the Mark Harrod Ltd catalogue allows the posts to be set up quickly, safely and can be left in as a permanent installation.

Carfest, now in its fifth year, is a festival that mixes top music acts with tyre squealing, high-octane motor action, plus plenty of family events, all in aid of Children in Need. It's inspired by Radio 2 DJ and new Top Gear presenter Chris Evans, who got involved with Mark Harrod earlier this year after a young boy rang in to the radio show tell him that the goals at his school had been vandalised so they couldn't play football properly anymore. A Mark Harrod Ltd delivery driver heard and rang the show to offer some goals and just 24 hours later the pupils of Weeke Primary School in Winchester were playing football with their new goalposts supplied by Mark Harrod Ltd, with Mark delivering them personally. As a result of this meeting, the idea of a collaborative project was mooted, and shortly afterwards GoalFest was born.

This is just the latest in a long line of community focused projects for Mark Harrod Ltd. As a company, as well as dealing with clubs and associations at the elite level, they are also dedicated to local and grassroots sport, and sponsor clubs and competitions across the country.