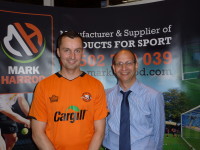 Mark Harrod Ltd has supplied the football goals to the 2010 World Blind Football Championship which took place at the Royal National College For the Blind, Hereford

The company have had a long association with blind football as they sponsor
34-year-old Jonathan Gribbin, who is England's top star striker.

Mark Harrod, said: "We're delighted to be involved in this under-reported football discipline and listened eagerly to see how they were getting on in Hereford. The skill involved has got to be seen to be believed and our England squad are certainly one of the very best "

England finished 4th Overall in the Championship with Spain finishing as world Champions.

Blind footballers play on five-a-side pitches, using footballs filled with ball bearings so players can hear the ball - an addition which can occasionally cause injuries.