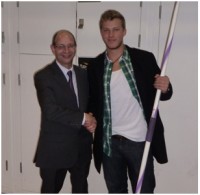 Mark Harrod Ltd is one of the latest businesses to support the Suffolk SportsAid Foundation, which raises money for Suffolk's aspiring athletes.

Matti, who is currently studying in Loughborough, is the youngest ever athlete to be inducted on to the world class talent programme and recently broke through the 70 metre barrier, achieving the 2nd longest throw in the world in 2010 by an under 20 year old. He has recently returned from warm weather training in South Africa with UK athletics and has his sights firmly set on representing Team GB at the London 2012 Olympics.

Mark Harrod commented: "It takes commitment, dedication and a large of amount of money for a sportsman or woman to reach the top and some talented athletes slip through the net due to lack of funding. We are delighted to be supporting Matti and associating ourselves with an athlete that true world-class potential. We look forward to following his progress and supporting him on his journey to 2012 and beyond."

Matti is one of a pool of athletes who were chosen to be part of the 'Destination Gold' Project, an innovative approach by the Suffolk SportsAid Foundation to use the excitement of the London 2012 Olympic and Paralympic Games to raise money to support some of the most talented athletes in the county. The Suffolk SportsAid Foundation is a joint initiative between Sports Aid, the national charity for sports people, Suffolk Sport and 'Rising to the Challenge Suffolk', the campaign to maximise the benefits for Suffolk from London 2012.

Suffolk businesses have been quick to get involved with the initiative with Adnams, Ipswich Building Society, Customer Service Direct, Ufford Park Hotel, Golf and Spa and Prettys all adopting a Suffolk Olympic or Paralympic prospect

"We are absolutely delighted that Mark and his team have agreed to sponsor Matti and support him on his exciting journey" commented Adam Baker, Suffolk County Council's Project Manager for the London 2012 Games. He added: "Destination Gold provides businesses with a great opportunity to be associated with an inspirational athlete.